The IS militant group has been cornered into a pocket of territory near the Syrian city center where it once staged beheadings and crucifixions. US-backed forces said the fight for the stronghold is nearly over. 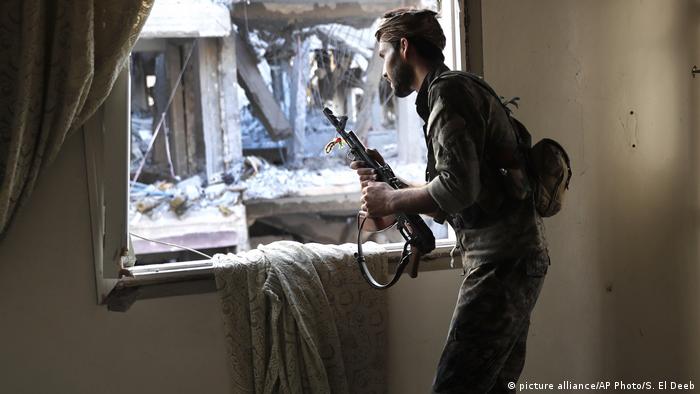 The US-backed campaign to liberate the Syrian city of Raqqa from the "Islamic State" militant group entered the "last stage" on Sunday, according to commanders on the ground.

In June, the Syrian Democratic Forces (SDF), an alliance of Kurdish and Arab fighters, began its offensive by surrounding the city and launching a multi-pronged assault with the help of aerial support from the US-led coalition battling the militant group.

Once claiming large swathes of territory across Syria and Iraq, the "Islamic State" has witnessed its so-called caliphate shrink following sustained offensives from regional actors and global powers, including Turkey, Russia and Syrian forces.

'Stand to the death'

In Raqqa, considered the militant group's de facto capital at the height of its power, the "Islamic State" has been pushed into a pocket of territory near the city center, where it once staged public beheadings and crucifixions.

"Daesh is massing there because this is the last stage. They will resist, or they will surrender or die," said SDF Commander Ardal Raqqa. "This is their last stand to the death."

However, Rojda Felat, who heads the "Wrath of the Euphrates" campaign to liberate Raqqa, said there was still fierce fighting along the front line, with the "Islamic State" using suicide bombers and snipers to keep SDF forces at bay.

The "Islamic State" rose to notoriety in 2014, when it seized parts of Iraq and Syria culminating in the occupation of Mosul. In June of that year, the militant group's leader, Abu Bakr al-Baghdadi, announced the establishment of a global caliphate from a historic mosque in Mosul.

The militant group took advantage of the Syrian civil war to expand its power in the country, but has since seen its territories dwindle over the past year after Iraqi-led forces recaptured Mosul. However, European authorities have warned of potential fallout with battle-hardened foreign fighters wishing to return to the continent.

Who is the 'Islamic State' leader Abu Bakr al-Baghdadi?

More than 300,000 people have been killed since 2011, when government forces launched a deadly crackdown on peaceful protesters calling on Syrian President Bashar al-Assad to step down.

Since then, the country has transformed into a multi-pronged conflict involving regional actors, global powers and militant groups, including Saudi Arabia, Russia and Hezbollah.