Renewed fighting in Syria intensifies, even in 'de-escalation zones'

The UN warns that the seemingly indiscriminate bombings of hospitals, schools and civilians could amount to war crimes. Officials say it is the most brutal fighting since last year's gruesome battle for Aleppo. 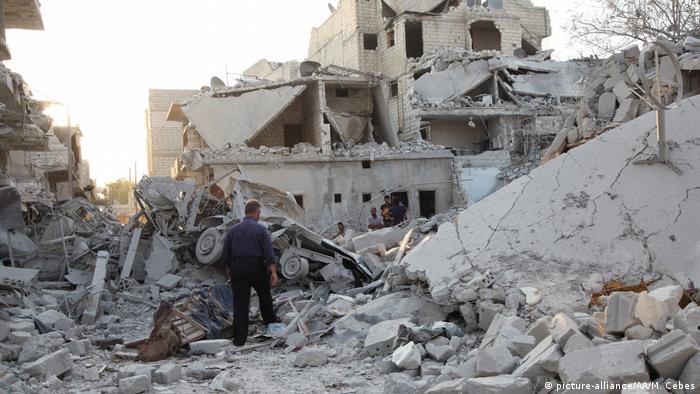 Fighting in Syria has intensified in recent weeks, with experts calling it the most vicious fighting since the battle for  Aleppo in late 2016.

As many as 10 hospitals have reportedly been attacked in 10 days.

"And of course this is outrageous, unacceptable," he said, adding that an attack on Sham hospital in Idlib alone had left 500,000 people without access to health care.

established by Russia in conjunction with Iran and Turkey.

Idlib, rural Hama and eastern Ghouta are among the safe zones coming under attack.

"Taken together, these are the worst levels of violence since the battle for Aleppo in 2016," he said.

"Hundreds of civilians killed is certainly a very conservative figure," Mardini said. "We see a very strong correlation between the escalation and the intensification in the fighting on one hand and the human cost of this conflict, the attacks on health facilities and civilian infrastructure."

UN regional humanitarian coordinator Panos Moumtzis said, "September was the deadliest month of 2017 for civilians with daily reports of attacks on residential areas resulting in hundreds of conflict-related deaths and injuries,"

Urgent education and psychological help for tens of thousands of children have also been disrupted and at least three schools have come under attack in the past week, according to the Save the Children organization.

Fifty-five of the 60 schools and learning centers that it supports across the provinces of Idlib and Aleppo, and attended by nearly 20,000 children, have had to close their doors for days at a time to try and keep the children safe, the organization said in a statement on Thursday,

"Education in Syria is yet again coming under attack, and it is too dangerous to keep the schools open while bombs are falling all around," said Sonia Khush, Save the Children's Syria director.

The United Nations also slammed the renewed fighting, noting that hospitals, schools and people fleeing violence have been "targeted by direct airstrikes."

It said such attacks may amount to war crimes, but it did not say who was to blame for the attacks.