From Madaya to Idlib - 'defeated but safe'

Thousands of civilians in southwest Syria have been evacuated from besieged rebel-held towns. DW spoke to a young evacuee who now finally feels safe while he marvels at the semblance of a normal life in Idlib. 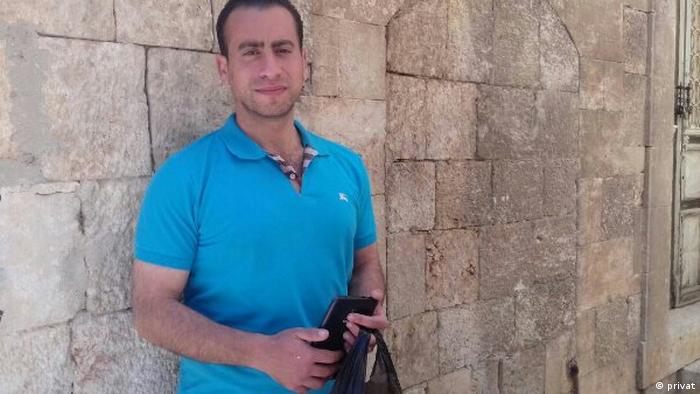 DW: Until last week, You lived in the town of Madaya, which has been under siege for more than a year now. Under an agreement between the Syrian government and rebels, several thousand people from four besieged cities were evacuated, and you were one of them. You are now in Idlib, which is in the north-eastern part of Syria, held by the rebels. How did you feel when you were told you that you would be allowed to leave Madaya?

Rajaai Bourhan: In general, I wasn't that happy. I left my family in Madaya - my father and my grandmother. They were too old to leave. But if I had stayed in Madaya, I would be dead or arrested.

During the evacuation of people from Fuaa and Kafraya, abus convoy was bombed and more than 120 people died. How did you experience the evacuation?

It took about 36 hours and it was very boring and long. We had to wait at a bus station in Aleppo. It was dangerous there - Daesh ("Islamic State") has it`s own plans. And I heard the bombing of the buses, it was only ten kilometers from where we were stopping. 14 soldiers from my hometown Zabadani who were protecting the buses were killed in the explosion. They were relatives and friends.

And I was also nervous. I haven`t seen the Syrian army for about six years now. So when we passed through the checkpoints, I was really nervous.

The last time I spoke to you, you said that if you had to leave Madaya, it would feel like they've won the upper hand . Do you feel defeated now?

Yes, we lost. I feel that. I am not that glad, but it was the right decision to leave Madaya. I was and I am still afraid of the regime. If I would have stayed in Madaya, I would have been arrested. They will have their revenge sooner or later, so I had to leave. I can not live under their control. 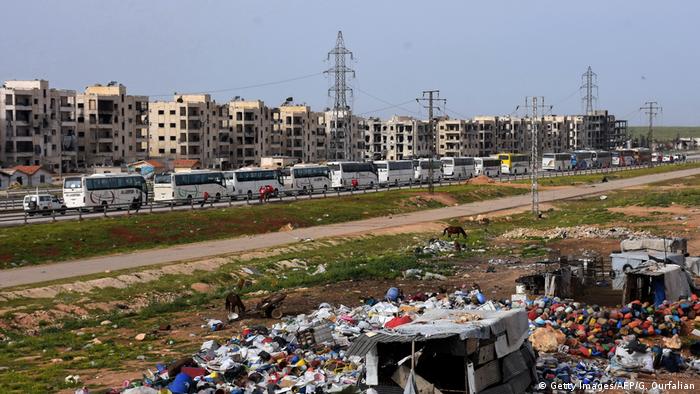 Just a few days ago, the convoy of buses with Syrian evacuees left Madaya

What did you experience when you reached Idlib?

I was surprised. I saw markets, people walking in the streets; there is electricity, internet, ice cream and food - things we did not have in Madaya. Madaya and Zabadani are destroyed. In Idlib, the destruction is not too bad. There are a lot of cars and I was really surprised to see cars. I felt like the little children that came from Madaya to Idlib: they were surprised when they saw a banana, a cherry, biscuits or chocolate. They have never seen that before. It sounds stupid, but I felt a little bit the same when I saw cars again.

In Madaya, you had 200 grams of rice or bulgur a day. Do you have enough to eat now?

Yes, of course! I can eat everything. The first thing I ate was fried chicken and it was great. And I have had a lot of chocolate, too.

Where do you live now?

The first night, we stayed in a school. Then some charity organizations started to give us homes. They paid the rent for the first month. After that, we will pay the rent on our own. But the houses are very bad. There is no furniture, so I need to buy some. I even have to buy water from tanks. So I am not really settled yet.

Is there work in Idlib, is there a public life?

In Idlib, there are people from all over Syria. You find people form Damascus, from Daraya, Homs and Aleppo. But in general, Idlib is a poor city. They used to come to Zabadani to work. Now we are living in this poor city. I started to search for jobs, but there are almost no jobs here. So I started to work as a translator for journalists. 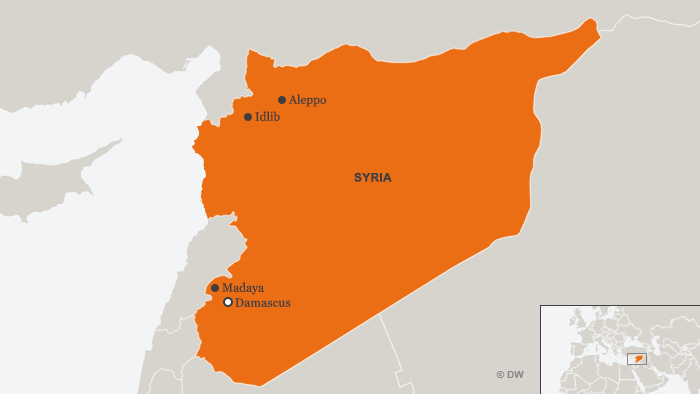 At the beginning of April there was a sarin gas attack in Idlib. And there is the danger of air strikes. Do you feel scared in this town?

What are your hopes for the future now?

I hope that there will be peace, of course. I want to go back do Damascus and Zabadani, I want to visit Aleppo once more. Idlib is like a big prison. It's like Gaza. It's like Madaya, but a big Madaya. So we are imprisoned here. So I want to go back to the cities and be free. And of course I want to finish my university degree.

Is it an option for you to leave Syria and flee to Europe?

I think of it sometimes. But for now, I prefer to stay here in Syria and I am thinking of rebuilding Syria after war all the time. I want to go back to Damascus when Assad is gone. That's where I see myself.

Rajaai Bourhan is 27 years old and lives in the Syrian city of Idlib.

In the besieged Syrian city of Madaya, 40,000 people are fighting for survival. Rajaan Bourhan is one of them. He talks to DW about living on 200 grams of rice a day and going without electricity or gas. (28.09.2016)

The evacuation of fighters and civilians from four besieged Syrian towns has resumed after a deadly weekend bombing. Some 30,000 people should be moved as part of the deal. (19.04.2017)