The Israeli Defense Forces have hit several Iranian targets near the Syrian capital Damascus. An Iranian official has threatened retaliation against Israel, saying his forces are ready to "wipe it off the earth." 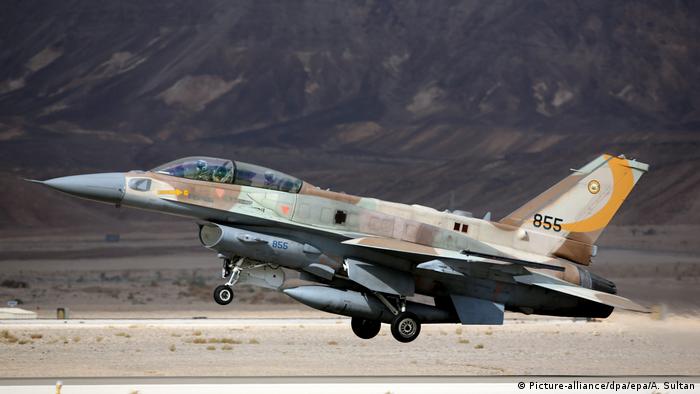 Israel's armed forces said on Monday that it had struck Iranian targets inside Syria, an unusual admission by a country that rarely comments on its military actions inside its neighbor.

"We have started striking Iranian Quds targets in Syrian territory," Israel's military wrote on Twitter, referring to an elite branch of Iran's Revolutionary Guard. "We warn the Syrian Armed Forces against attempting to harm Israeli forces or territory."

The Britain-based Syrian Observatory for Human Rights said the strikes left 11 people dead. Russia, a key supporter of Syria, said at least four Syrian soldiers were killed in the attack.

Iranian General Aziz Nassirzadeh, who heads Iran's air force, said his soldiers are "impatient and ready for a fight against the Zionist regime to wipe it off the earth," in comments circulated on a news site with links to state media.

"We are operating both against Iran and against the Syrian forces that are abetting the Iranian aggression," Netanyahu said on Monday. "We will strike at anyone who tried to harm us. Whoever threatens to eliminate us bears full responsibility."

A first for everything

Israel has traditionally avoided admissions about its military strikes in Syria, primarily to avoid greater involvement in Syria's civil war.

But Anshel Pfeffer, a British reporter for Israeli newspaper Haaretz, said the strikes marked a shift in for the Israeli armed forces in communicating its operations.

"This is the first time Israel has not only taken responsibility for attacking Iranian targets in Syria but announced they were taking place in real-time," said Pfeffer. "Sounds like someone has a point to make."

Foreign fighters are being sucked into the Syrian conflict. And many who are sent to the frontline are barely out of their teens. DW's Naomi Conrad met one of them. (05.05.2018)

The blast reportedly hit near an intelligence office in Damascus. Separately, Syrian officials say they repelled Israeli missiles near Damascus' airport, while Israel says it intercepted a rocket in Golan Heights. (20.01.2019)

Syrian air defenses shot down most of the incoming missiles, but one reportedly hit a warehouse at Damascus airport. Israel has vowed to prevent Iran from setting up permanent military bases in Syria. (12.01.2019)