Economic frustration is spreading in Iran as tensions with the United States increase. Many well-educated young Iranians are contemplating life abroad. Is the US's "campaign of maximum pressure" working? 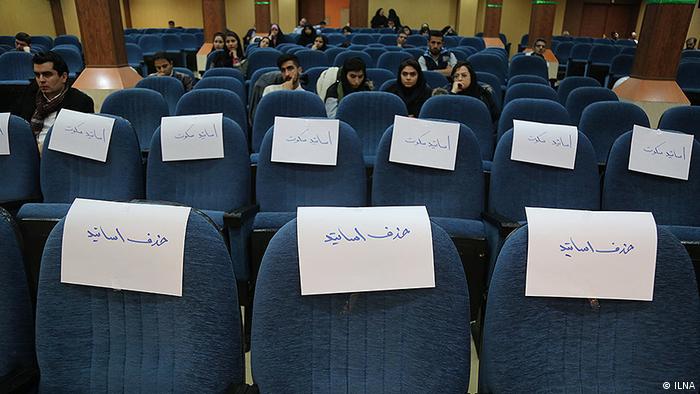 Javad was raised in northern Iran and comes from a farming family who owns rice fields. He wanted a different life and moved to the capital. "I had to work hard to establish myself in Tehran," he wrote in an email to DW. "Our country is very centralized, and Tehran is at its heart. It is the only place that one has the chance to start a different life, but now a lot of others are thinking like me and want to leave the country altogether."

The 28-year-old is busy learning German. "Our country is stuck in a dead end," he wrote, "and I don't think we can get out of it." He wants to emigrate. "I studied marketing and have a couple of years' job experience," he said. "Our economy is in shambles. The situation is getting worse by the day."
Read more: A desperate move by Iranian President Rouhani

Since the Islamic Revolution took place in 1979, Iran has posted some of the world's highest emigration numbers for academics, intellectuals and scientists. Although official statistics are not available, the Iranian daily newspaper Shargh recently published the results of a study on emigration by students.

The study found that 70% of people who won medals for physics, 77% who won for math, and 50% each of medal winners in chemistry and computer science left Iran after completing their studies.

"According to a study, 29.8% of citizens want to emigrate because of the societal, cultural, and moral situation in our country," Mohammad Reza Javadi Yeganeh, Tehran's municipal cultural and social affairs deputy, recently wrote on Twitter, citing another study. "That is sad. Sadder still, those results are from a 2016 study, when our country was doing much better."

Read more: Pompeo says US ready to talk with Iran 'with no preconditions'

Referring to the information from Iran, the US government, which has increased efforts to isolate the country since the inauguration of President Donald Trump in 2017, said that "one in four of Iran's most educated citizens leave their country when given the opportunity." Reports claim that students hope to find more social and religious freedom and better employment opportunities abroad.

The United States accuses Iran of being behind attacks on oil tankers in the Gulf of Oman on June 13. US officials have released what they says is video evidence of Iran's guilt. There is, however, no way to verify the authenticity of the grainy footage.

"We take these explanations very seriously," German Chancellor Angela Merkel said on Tuesday, "and there is strong evidence." Still, she said, negotiations are the right way forward.

Last May, the United States, under Trump, withdrew from the landmark multinational nuclear agreement with Iran that had taken years to negotiate.

The Joint Comprehensive Plan of Action (JCPOA) stipulated, among other things, that Iran would limit its enrichment of uranium, export its weapons-grade plutonium, and submit to regular inspections by the International Atomic Energy Agency (IAEA).

In return, international sanctions tied to Iran's nuclear program would be lifted, opening the country up to multinational corporations.

Although Iran upheld its end of the JCPOA — a fact that the IAEA repeatedly confirmed — the United States unilaterally withdrew from the deal and initiated a "campaign of maximum pressure."

One aspect of that campaign was the imposition of comprehensive economic sanctions. The European Union attempted to create mechanisms that would allow countries to avoid the US's sanctions, thus softening the blow to Iran, but the bloc failed in its efforts.

And there are no indications that things will improve anytime soon. Iran's government recently gave the JCPOA's remaining signatories an ultimatum: If the promised economic benefits for remaining party to the deal do not materialize, then the country will withdraw on July 7.

Farzaneh Ebrahimzadeh is a freelance journalist who conducts research on contemporary Iranian history, with a focus on efforts toward gender equality. More than 30,000 people follow her projects on social media platforms such as Twitter.

"We are overwhelmed with bad news every day," Ebrahimzadeh told DW. "And we are also confronted with events that turn our lives upside down — events that we can't influence."

Ebrahimzadeh said she, too, had been worn down. "My hopes for a better future in Iran are close to zero," she said. "At least last year I could plan a week of my life — now I can plan an hour at most."