Iran is planning to remove four zeroes from its national currency, the rial, as the country struggles with soaring inflation. The oil-rich nation's economy has been hit hard by unilateral sanctions imposed by the US. 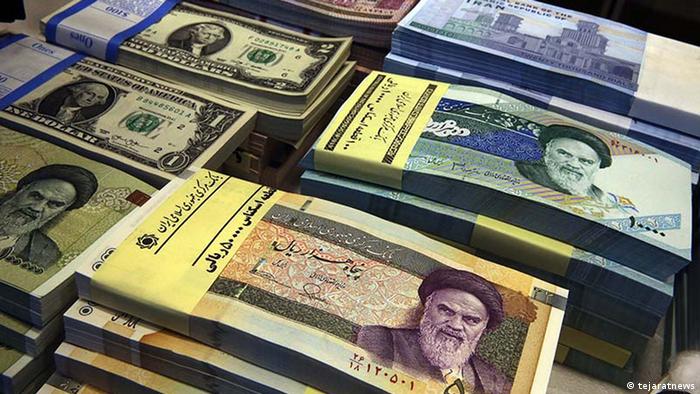 The Iranian government has approved a plan to ax four zeroes from the rial in a bid to tackle high inflation in the country. The measure was announced by an Iranian government spokesperson, Ali Rabiei, following a Cabinet meeting on Wednesday.

Iran's central bank presented the proposal to the government in early January.

Iran has been facing a severe currency crisis as a result of economic sanctions imposed by Washington, after President Donald Trump withdrew the US from the Iran nuclear deal.

This has pushed inflation up, affecting the prices of everything in the country, including food and medicines. Many residents currently pay more than 1 million rial ($30, €27) for a simple trip to the grocery store.

The United States insists that medicines and humanitarian goods are exempt from the sanctions, but restrictions on trade have made many banks and companies around the world hesitant to do business with Iran, fearing punitive measures from Washington.

Iran, as a result, is cut off from the international banking system.

Read more: Iran: No more 'deadlines' to save nuclear deal

Tehran has tried to keep its economic situation in check by controlling foreign currency rates and cutting down on those moving their money from the rial to other currencies.

Iran's government on Wednesday also decided to rename the currency, which will now be called the toman, a former super unit of official currency that was in circulation until 1925. Iranians have for decades continued to use the term toman for its simple conversion rate: 1 toman is equal to 10 rial.

The EU's plan to continue trading with Iran in defiance of US sanctions has, so far, come up short. Tehran wants oil included in the new barter system, INSTEX. Despite US threats, Brussels appears to be listening. (12.07.2019)

Tensions are running high in the Persian Gulf after Iran warned that it will increase its enrichment of uranium to "any amount that we want," starting on Sunday. Many in Iran feel conflicted about the current situation. (05.07.2019)