Tensions are running high in the Persian Gulf after Iran warned that it will increase its enrichment of uranium to "any amount that we want," starting on Sunday. Many in Iran feel conflicted about the current situation. 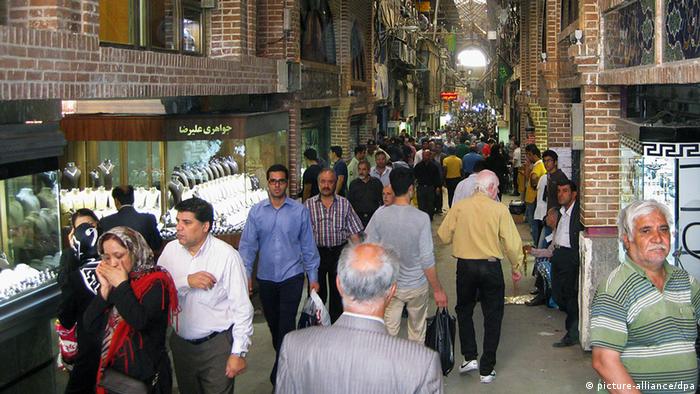 July 7 marks the deadline set by Iran to the remaining signatories of the 2015 international nuclear deal — the UK, France, Germany, Russia and China — to come up with new terms to ensure that Iran's commercial interests aren't hurt by renewed American sanctions.

Tensions between Iran and the US have been running high ever since President Donald Trump pulled America out of the deal — officially known as the Joint Comprehensive Plan of Action (JCPOA) — over a year ago and started slapping unilateral sanctions on Tehran.

In response, Iran said it would begin backing away from the nuclear accord's terms, if the other powers didn't find a way to ease its pain.

Iranian authorities on Monday acknowledged Iran broke through a limit placed on its stockpile of low-enriched uranium, exceeding the 300-kilogram limit set by the 2015 deal.

Two days later, Iranian President Hassan Rouhani warned that Tehran will increase its enrichment of uranium to "any amount that we want," beginning on Sunday. The comments put increased pressure on Europe to find a way around the intense US sanctions targeting Iran.

Iran's nuclear deal currently bars it from enriching uranium above 3.67%, which is enough for nuclear power plants, but far below the 90% needed for weapons. An increasing stockpile and higher enrichment closes the estimated one-year window Iran would need to produce enough material for a nuclear bomb, something Iran denies it wants but the nuclear deal sought to prevent.

Trump responded to Rouhani's statement by warning Iran to "be careful with the threats." The US president added: "They can come back to bite you like nobody has been bitten before."

The US has beefed up its military presence in the Middle East by deploying an aircraft carrier task force, B-52 bombers and F-22 fighters to the region. And Iran recently shot down a US military surveillance drone.

Both Washington and Tehran have said they don't want war. But as tensions continue to rise, the possibility of a miscalculation remains considerable, risking a dangerous escalation.

Read more: Iran warns US to drop sanctions as time runs out for nuclear deal

From bad to worse

Many ordinary Iranians, however, are preoccupied by day-to-day economic problems. Over the past couple of years, inflation and unemployment have risen drastically. For many people in the sanction-hit country, it's becoming increasingly hard to get by.

"I heard about the 60-day deadline [ending on July 7] Iran set for the Europeans. But I didn't care enough to check exactly which date that would be? What difference would it make for us in the end?" said Lida Ardeshir, a 40-year-old tourist guide living in Tehran.

"It's becoming impossible to live a normal life. Everything has become so expensive. Most people like me are struggling to make ends meet. How can it become worse than this?" she told DW.

The US sanctions have hurt ordinary Iranians by sending prices for staples and consumer goods soaring and weakening the local currency. Business and investment activity have suffered as a result of the economic downturn.

The reimposition of American sanctions turned the situation from bad to worse, say many Iranians. "In Iran, people were already under a huge amount of pressure before the US sanctions were reimposed. With the prices now skyrocketing and increased restrictions on people, we have lost all ability to cope," Shahab, an Iranian, told DW.

Surprisingly, some Iranians appear to welcome an armed conflict between Tehran and Washington. This includes even people who experienced the ill effects of the 1979 Islamic Revolution as well as the 1980-88 Iran-Iraq war. They are willing to ignore the past and view war as a means of achieving "liberation from the vicious Islamic Republic," said Nader.

"We don't talk or care about the deadline. We all wait and hope for a spark that would free us after 40 years of darkness," Nader told DW via Telegram.

The level of violence the Iranian regime is ready to use against activists and the civil society has made it impossible to bring about change from the inside, he said. "Only a foreign power is able to bring us change. No one likes a war, but more and more people are ready to take the losses and damage of a war, rather than continuing a life of suffering under the reign of the Islamic Republic's government."

Some Iranian social media users have joked about the deadline set by Tehran. "I think it's not a bad idea for Zarif to give Europe a 90-day deadline afterward, so that they could sit and think about why they rejected the original 60-day deadline. This punishment may bring them back to their senses," tweeted Saeid Hosseinpour.

Whatever happens, the Iranian people will end up as victims anyway, Meysam told DW via Telegram. "We're stuck in a vicious cycle. Hoping for the change that was promised in exchange for stopping nuclear activities, doesn't seem to make any sense anymore."

Business ties between Germany and Iran have suffered a major setback in recent months. US sanctions against Tehran are ratcheting up pressure on German companies, which have found it hard to stand their ground in Iran. (27.06.2019)