Iran's president has warned Europe and the United States that it would completely ignore enrichment limits after Sunday. France warned that Iran would not gain anything by boosting enrichment levels. 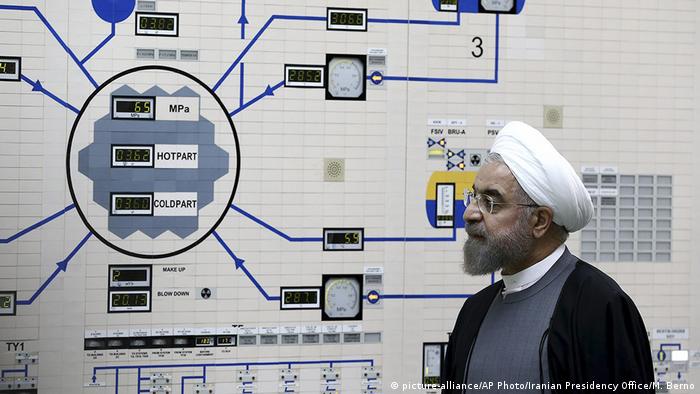 Iran's President Hassan Rouhani warned the international community on Wednesday that Tehran would boost its uranium enrichment to "any amount that we want" after July 7.

"Our level of enrichment will no longer be 3.67. We will put this commitment aside by whatever amount we feel like, by whatever amount is our necessity, our need. We will take this above 3.67," Rouhani was quoted as saying by the Iranian IRIB news agency.

Iran is allowed to enrich up to 300 kilograms of uranium to 3.67% under the 2015 Iranian nuclear accord known as the Joint Comprehensive Plan of Action (JCPOA). About 1,500 kg of uranium enriched at around 90% is needed for one nuclear weapon.

Rouhani also said Iran would resume construction of a heavy water reactor that could start producing plutonium, which can also be used to generate nuclear power or create a nuclear bomb. The JCPOA forbids Iran from further construction on the reactor.

The president said Iran would return to full compliance with the deal if all parties, including the United States, also comply with the agreement.

Tensions between Tehran and Washington remain high since US President Donald Trump withdrew from the 2015 Iranian nuclear accord and imposed harsh sanctions on the Islamic country. That prompted Iran to threaten to suspend some of its commitments to the deal on May 8.

The French Foreign Ministry said Wednesday that Iran would not gain anything by violating the nuclear pact.

"Putting it (the deal) into question will only increase the already heightened tensions in the region," Agnes von der Muhll, a foreign ministry spokeswoman, said.

"That is why France with its European partners have asked strongly that Iran reverse the excess enrichment without delay and refrain from further measures that undermine its nuclear commitments," von der Muhll added.

Iran's Foreign Minister Javad Zarif and the International Atomic Energy Agency (IAEA) confirmed Monday that Tehran had breached the 300 kilograms of low-enriched uranium  allowed under the 2015 international nuclear accord.

'A show of defiance'

Falling back under the 300 kilogram limit is easily reversible, and the remaining powers in the JCPOA would only become concerned if enrichment levels were ramped up to 20%, Francois Nicoullaud, a former French ambassador to Iran, told the AFP news agency.

"As long as Iran does not get close to a threshold of a ton of lightly enriched uranium, there is no pressing concern," Nicoullaud said. But if Iran "amassed, for example, a stock of 200 to 300 kilograms of uranium enriched to nearly 20%, there would be cause for great concern."

The International Crisis Group, a conflict prevention non-profit, wrote in a January assessment that to strengthen its negotiating position, Tehran "could creep past some of the JCPOA's boundaries both as a show of defiance and in hopes of pressuring the deal's remaining parties to do more to save it."

Even while insisting they do not want a war, leaders of Iran and the US have again ratcheted up international tension. The EU is scrambling to salvage the landmark 2015 deal that froze Iran's nuclear weapons program. (26.06.2019)

The UN's nuclear watchdog, the International Atomic Energy Agency, has found that Iran is now using machines that allow it to switch more easily between uranium enrichment levels.