The US move to reimpose sanctions on Iran and choke off the last remaining sources of Tehran's oil revenue has crippled the Iranian economy. For many ordinary Iranians, it's becoming increasingly hard to get by. 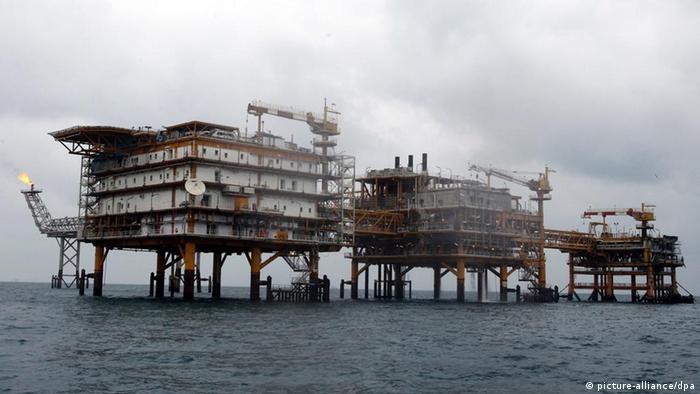 US President Donald Trump has slapped fresh sanctions on Iran as part of his "maximum pressure" campaign against the Middle Eastern nation. Trump's executive order on Monday targeted none other than Iran's supreme leader, Ayatollah Ali Khamenei, and his associates, with financial sanctions.

Tehran and Washington are currently locked in a bitter standoff, and escalating tensions have fueled fears of an unintended slide toward a military confrontation between the two sides, particularly after Iran shot down a US spy drone over the Persian Gulf last week.

The US has also beefed up its military presence in the region and blacklisted Iran's Revolutionary Guards as a "foreign terrorist organization." In response, Iran declared the US a "state sponsor of terrorism" and American forces in the Middle East and beyond as "terrorist groups."

Last year, Trump unilaterally pulled the US out of the landmark nuclear deal that Iran and six world powers struck in 2015. He has since reimposed wide-ranging sanctions, aimed at putting an end to Iran's oil exports, crippling its main source of foreign exchange and forcing Tehran to abandon its nuclear ambitions. 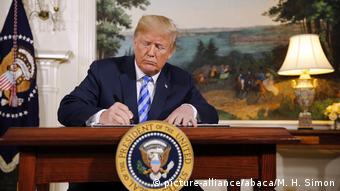 Since pulling the US out of the nuclear deal, Trump has reimposed wide-ranging sanctions on Iran

How have US sanctions hit Iran?

The US moves have hit the Iranian economy hard. While the oil-rich nation's crude exports have been down, inflation and unemployment have risen drastically.

Iran, which sits on the world's fourth-largest oil reserves and second-biggest gas reserves, shipped over 2.5 million barrels per day of crude in April 2018, the month before Trump withdrew the US from the nuclear deal. That figure was down to about 400,000 to 500,000 barrels per day in May, reported Reuters news agency, citing industry sources.

The lifting of international sanctions in 2016 spurred rapid growth in Iran, with the country's economy expanding by more than 12% in 2016. But the reimposition of sanctions last year dealt a massive blow. The Iranian economy, the second-largest in the region behind Saudi Arabia's, shrunk by 3.9% last year, estimated the International Monetary Fund (IMF).

Frustration over the sanctions is running high among Iranians, who have seen the value of Iran's currency, the rial, plummet by about 60% over the past year. Inflation is up to 37% and the cost of food and medicine has soared by 40% to 60%, according to EU figures.

"In the last weeks and months, the prices of daily products have increased dramatically for every Iranian," Michael Tockuss, managing director of the German-Iranian Chamber of Commerce, told DW. "The sanctions are not specific anymore; they're not directed against special companies or against the rulers of the country. Instead, they hit average Iranians all over the country."

US sanctions are crippling Iran's economy

What's the effect on unemployment?

Many foreign companies, including carmakers like Daimler and Peugeot and oil group Total, have wound up their operations in Iran in recent months. This has driven up the jobless rate in the country, with overall unemployment currently hovering around 12%.

Iran's young people are bearing the brunt of unemployment even more. The youth unemployment rate is close to 30% in a country where almost 40% of the 80 million people are under 25.

Iranian President Hassan Rouhani says his country is facing "economic war." But Washington stresses that economic pressures on Tehran are directed at the government, not at the Iranian people.

In May, Iran said it would begin backing away from the nuclear accord's terms, setting a July 7 deadline for the deal's remaining signatories — the UK, France, Germany, Russia and China — to negotiate new terms or it would resume enriching uranium closer to weapons-grade levels.

Observers say that should Iran follow through on enriching uranium beyond the permitted levels, the nuclear deal could collapse entirely. In that case, UN sanctions would also be reimposed, a move that could devastate the already crisis-hit economy.

Following Trump's withdrawal from the nuclear deal, Germany, France and the UK set up a special payment channel called INSTEX to circumvent US sanctions and continue trade with Iran. The European move came despite the Trump administration warning against initiatives to sidestep the sanctions on Iran.

The mechanism was set up in January, but it has so far failed to deliver. While the payment channel would theoretically shield European companies from US sanctions-related penalties, many businesses have been reluctant to trade with Iran due to concerns they could find themselves on the wrong side of US law and risk losing access to the American market.

The failure has caused disappointment in Iran. Iran's supreme leader, Khamenei, even dismissed INSTEX as a "bitter joke."

"Practically, at the moment, this system plays no role," said Tockuss.

Holly Dagres, nonresident fellow at the Washington-based Atlantic Council, told DW in May that the EU's options were limited when it came to preserving the nuclear deal and trading with Iran.

"The reality is that Europe is limited in terms of telling its companies to go and do business in Iran. There is this greater fear that they will be sanctioned," said Dagres.

US President Donald Trump signed off on a new round of "hard hitting" sanctions against Iran amid heightened tensions between the two countries. The sanctions will target Iran's supreme leader and other officials. (24.06.2019)

President Trump had reportedly approved air strikes in retaliation for Tehran's downing of a US drone. A decision to stand down was allegedly made after Trump met with Congressional leaders. (21.06.2019)