US President Donald Trump has signed off on a new round of sanctions against Iran amid heightened tensions between the two countries. Meanwhile, the UN Security Council urged all parties "to exercise maximum restraint." 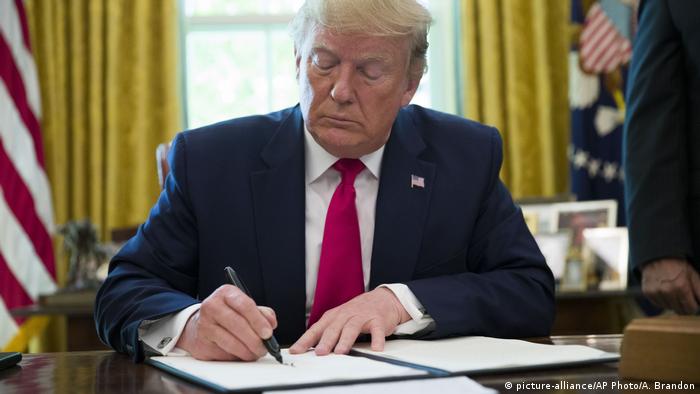 US President Donald Trump signed an executive order on Monday that imposed what he said were "hard-hitting" new sanctions against Iran.

US Treasury Secretary Steven Mnuchin said the measures "go after the supreme leader's office and lock up literally billions more in assets."

Mnuchin added that Iranian Foreign Minister Mohammad Javad Zarif would be added to the sanctions list "later this week."

Trump said that although Washington did not want a conflict with Iran, the punitive financial measures were part of an effort to increase pressure on the government.

"Never can Iran have a nuclear weapon," the US leader added.

Trump last year pulled out of the landmark multinational 2015 Iran nuclear deal that had seen sanctions eased in exchange for curbing its nuclear program.

Foreign Minister Zarif asserted that the Trump administration, and particularly national security adviser John Bolton, were more interested in war than in diplomacy.

"[Trump] is 100% right that the US military has no business in the Persian Gulf," Zarif wrote, adding that Bolton and other known US hawks "despise diplomacy, and thirst for war."

"The fruitless sanctions on Iran's leadership and the chief of Iranian diplomacy mean the permanent closure of the road of diplomacy with the frustrated US administration," said Mousavi in a statement issued by Iran's state-run news agency IRNA.

At the United Nations, US envoy Jonathan Cohen said the Trump administration's aim was to get Tehran back to negotiations.

The latest sanctions amid heightened tensions between Washington and Tehran followed Iran's downing last week of an unmanned US surveillance drone that saw Trump first consider but ultimately call off retaliatory strikes.

Iran claimed the drone had violated its airspace, while the US said it was flying over international waters. The US has also blamed Iran for attacks on oil tankers in the Gulf of Oman in recent weeks, which Iran has denied.

US Secretary of State Mike Pompeo traveled to Saudi Arabia and the United Arab Emirates on Monday for surprise talks with leaders in an attempt to build a "global coalition" against Iran.

The rest of the signatories of the nuclear deal — including Germany, the UK, France, Russia and China — have been working to try and salvage the deal by helping Iran circumvent US sanctions. Iran set a deadline of July 7 for the powers to deliver a solution, or it will begin withdrawing from parts of the deal and begin enriching uranium at a higher level.

Late Monday, the UN Security Council held out hope for a dialogue and released a statement urging all parties "to exercise maximum restraint and take measures and actions to reduce escalation and tension."

But Iran's UN ambassador, Majid Takht Ravanchi, warned that the situation in the Persian Gulf is "very dangerous." He seemingly rejected the possibility of talks with the US, saying "you cannot start a dialogue with someone who is threatening, who is intimidating you."

US Secretary of State Mike Pompeo is making surprise visits to Saudi Arabia and the UAE to ensure that they are "strategically aligned" on Iran. The trips come amid escalating tensions after Iran shot down a US drone. (24.06.2019)