Angela Merkel has made a plea for the international community to band together to peacefully resolve the conflict between Iran and the US. Tensions in the Gulf of Oman have spiraled in recent days. 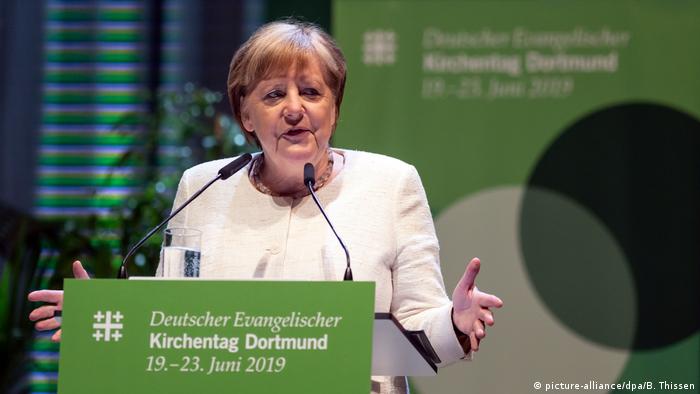 Speaking at a gathering of Protestant churches on Saturday, German Chancellor Angela Merkel called for a "political solution" on Iran.

"I say that (a political solution) should not just be a hope, but that it should be worked towards with the utmost seriousness," Merkel told an audience of around 10,000 people in Dortmund.

Tensions between Tehran and Washington have escalated in recent days following attacks on two oil tankers in the Gulf of Oman and Iran's downing of a US reconnaissance drone. US President Donald Trump then approved a retaliatory strike against Iran before calling it off.

Merkel said the conflict would be addressed at next week's G20 summit in Japan. Germany's options were "certainly not infinite," she said. "But we can also help to make what we want — a political, diplomatic solution — possible."

Read more: Opinion: Donald Trump sets US up for conflict with Iran

Trust a 'foundation' of international politics

Merkel also warned governments not to isolate themselves from the international community, saying that no country could tackle the global challenges of the 21st century alone.

The German chancellor has strongly defended multilateralism while criticizing Trump's decision to withdraw unilaterally from the Paris climate agreement and the Iran nuclear deal.

"In some places distrust seems to have been declared government policy," she said. "Without trust as a foundation, international politics cannot succeed."

During the event in Dortmund, Merkel was joined on stage by former Liberian President Ellen Johnson-Sirleaf to discuss the topic "Trust as the basis of international politics?"

Trump says Iran strikes would not have been 'proportionate'

The US president said he did not greenlight strikes on Iran because he was told 150 people would have been killed. The US has reportedly called for a UN Security Council meeting to discuss the crisis. (21.06.2019)