Trump says Iran strikes would not have been 'proportionate'

The US president said he did not greenlight strikes on Iran because he was told 150 people would have been killed. The US has reportedly called for a UN Security Council meeting to discuss the crisis. 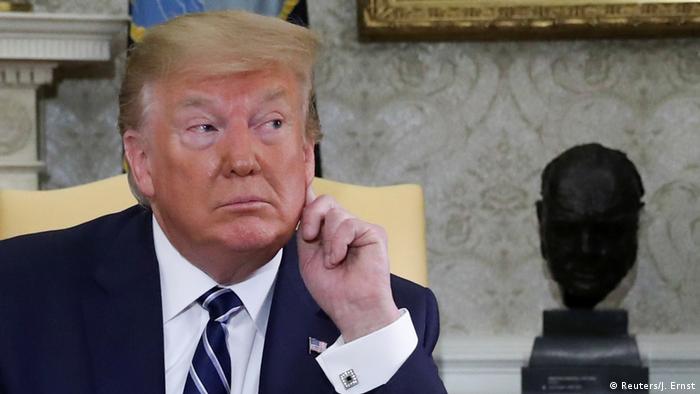 US President Donald Trump said on Friday that he did not approve military strikes against Iranian targets because the potential death toll would have been disproportionate to the downing of a US drone.

On Twitter, Trump said the US was "cocked and loaded" to strike three different Iranian targets, but then he was told by a general that 150 people could be killed.

"10 minutes before the strike I stopped it, not proportionate to shooting down an unmanned drone," the US leader wrote.

In an interview with NBC News on Friday, Trump said he hadn't given his final approval and there hadn't been any planes in the air at the time, "but they would have been pretty soon."

Earlier reports said that US planes and ships had already been mobilized for the strikes.

House Speaker Nancy Pelosi said she was glad that the strikes were called off, but urged for Trump to seek approval from Congress before taking any military action against Iran.

"A strike of that amount of collateral damage would be very provocative, and I'm glad the president did not take that," Pelosi told reporters.

The US has reportedly called for a closed-door meeting of the United Nations Security Council on Monday to discuss the crisis with Iran. Iranian authorities have said they've also lodged a complaint with the UN Security Council.

Tensions between Washington and Tehran reached a new level in recent days, stoking fears of a possible war between the two countries.

The tensions started after explosions hit two oil tankers in the Gulf of Oman last week, which the US has blamed on Iran.

That incident was followed by Iran downing an unmanned, high-altitude US surveillance drone. Iran claimed that the drone had violated its airspace, while the US said it was over international waters.

"I don't see Iran backing down unless the US pulls back on its saber rattling," Holly Dagres, nonresident fellow at the Washington-based Atlantic Council, told DW.

"The international community needs to step up and de-escalate the situation," she added.

The situation has prompted major airlines such as Lufthansa to reroute their planes to avoid the Strait of Hormuz over fears about being mistakenly attacked.