President Donald Trump says he’s not intent on toppling Iran’s regime to stop it acquiring nuclear arms. His nominee for defense secretary Mark Esper says the US ‘needs to get back on the diplomatic channel.’ Trump in remarks at a cabinet sitting in Washington on Tuesday asserted that "a lot of progress” had been made in ending a high-stakes US standoff with Iran, which has long denied ambitions to acquire nuclear weapons.

US Secretary of State Mike Pompeo added that Iran had signaled in recent days that it was "prepared to negotiate” about ballistic missiles — potential carriers and under the control of Iran's paramilitary Revolutionary Guard.

Read more: What's at stake in the Persian Gulf

"For the first time the Iranians have said that they are prepared to negotiate about their missile program," said Pompeo, adding that extra US economic sanctions had become "terribly effective."

Those comments drew a quick denial from the spokesman for Iran's mission to the United Nations, who wrote on Twitter that "Iran's missiles...are absolutely and under no condition negotiable with anyone or any country, period." 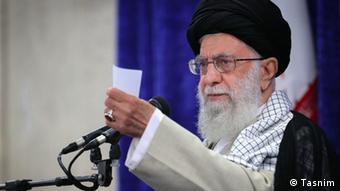 That 2015 six-power deal negotiated under former president Barack Obama had required Iran to curtail its uranium enrichment in exchange for the lifting of economic sanctions by world powers.

"We'll help them in any way we can,” said Trump Tuesday, but added: "they can't have a nuclear weapon. We're not looking, by the way, for regime change.”

In comments Tuesday via Iran's state news agency IRNA, Iranian vice president Eshaq Jahangiri said the US had jeopardized the deal, but intimated that Iran would return "fully” to the deal if the US lifted its extra crippling sanctions.

In recent weeks the US balked at reprisal air strikes after Iran downed an American drone while blaming Iranian forces over obscure attacks on tanker ships near the oil-exporting Gulf region's conduit, the Straits of Hormuz.

Designated US Secretary of Defense Mark Esper attending his Senate confirmation hearing on Tuesday said: "We are not seeking war with Iran. We need to get back on the diplomatic channel.”

On Monday, European parties to the treaty, reacting to Iran's notification that it had enriched uranium past a limit set in 2015, decided not to trigger a dispute mechanism but instead to pursue more diplomacy. 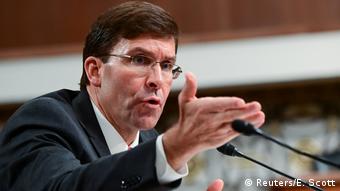 In a diplomatic memo leaked last weekend, Britain's former ambassador to Washington suggested that Trump quit the 2015 deal for "ideological and personal reasons” because it was associated with Obama.

It was an "act of diplomatic vandalism” to spite Obama, wrote Kim Darroch.

Britain announced Tuesday it was sending a third Royal Navy warship, the HMS Kent, to the Gulf "later this year,” but insisted it did not "reflect an escalation.”

Last week, Britain said another of its ships, the HMS Montrose, had warned off three Iranian gunboats that were trying to "impede” a British oil tanker.

Iranian officials denied that the incident ever happened.

Two weeks ago of Gibralter, British marines help detained an Iranian tanker said by the US to have been carrying oil to Syria is breach of sanctions.

On Saturday, British Foreign Secretary Jeremy Hunt said Britain could facilitate the tanker's release if Iran gave assurances that EU sanctions would not be breached.