UK says Iran tanker will be freed, unless it goes to Syria

The UK has told Iran that an Iranian tanker seized by British forces off the coast of Gibraltar last week would be released, so long as it did not go to Syria. Iran has pledged to continue oil exports. 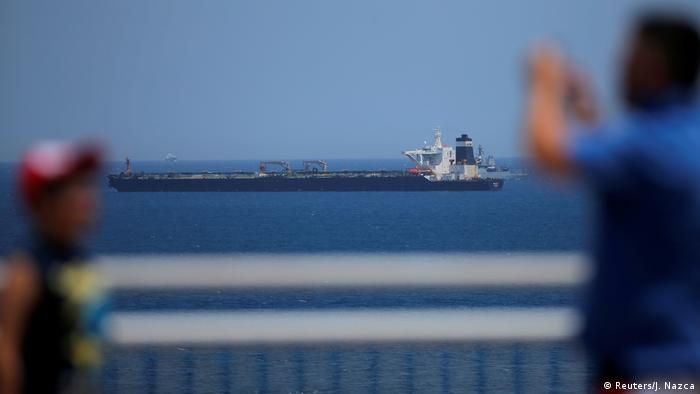 UK Foreign Secretary Jeremy Hunt told his Iranian counterpart, Mohammad Javad Zarif, on Saturday that London would facilitate the release of the oil tanker, Grace 1, if Tehran assured that it would not head to Syria.

Hunt said he had a "constructive call" with Zarif, and that the Iranian foreign minister had assured him that Tehran "is not seeking to escalate" tensions between the two countries.

"I reassured him our concern was destination not origin of the oil on Grace One & that UK would facilitate release if we received guarantees that it would not be going to Syria, following due process in (Gibraltar) courts," Hunt wrote on Twitter.

Iran's foreign ministry issued a statement on Saturday saying Iran would continue oil exports under any conditions. Zarif had told Hunt this during the call on Saturday, the ministry said.

Zarif also said that Britain should quickly release the tanker.

Last week, British Royal Marines seized the tanker off the coast of the British Mediterranean territory of Gibraltar on suspicion of violating EU sanctions against Syria. The tanker was carrying 2.1 million barrels of light crude oil, the head of Gibraltar's government said.

Iran has denied that the tanker was taking oil to Syria in violation of EU sanctions and blamed the United States for arranging the seizure of the tanker. Tehran has also demanded the UK release the ship, and threatened retribution.

The tanker's interception has strained UK-Iran ties. The British navy said on Thursday it had stopped three Iranian paramilitary vessels from disrupting the passage of a British oil tanker through the Strait of Hormuz, a critical shipping lane at the mouth of the Persian Gulf. Iran's Revolutionary Guard denied any incident had occurred in the strait.

In the wake of the recent developments, the UK said on Friday it was moving up its timetable for relieving the HMS Montrose, a frigate operating in the Persian Gulf, with the larger HMS Duncan destroyer.

The tanker's interception came at a time when tensions in the Middle East are already running high, as US President Donald Trump's administration continues its campaign of maximum pressure on Iran.

European countries have not imposed sanctions against Iran, but have had them in place against Iran's ally Syria since 2011.

Gibraltar's police said on Friday that four crew members who had been arrested, including the vessel's captain and chief officer, had been released on bail without charge, but their investigation was ongoing.

Meanwhile, to calm Middle East tensions, the European Union says it supports an Iraqi proposal to hold a regional conference.

During a visit to Baghdad on Saturday, EU foreign policy chief Federica Mogherini warned against "dangerous adventures" in the region. She said the EU's priority was to avoid escalation and any miscalculations that could lead to "dangerous consequences" for Iraq and beyond.

Police said the four crew members of the Grace 1 are still under investigation. Their release came as the UK said it would send a second naval frigate to the Persian Gulf amid escalating tensions with Iran. (13.07.2019)

Iran has tried to intercept a British oil tanker, forcing a Royal Navy warship to intervene, the UK said. Meanwhile, the captain of an Iranian tanker seized off British territory Gibraltar last week has been arrested. (11.07.2019)

European signatories to the Iran nuclear deal have urged Tehran to stop enriching and stockpiling uranium. After the US pulled out of the 2015 accord, Iran has said it will continue enrichment until sanctions are lifted. (09.07.2019)