On Saturday, world leaders gathered in Biarritz, France, for this year's tense G7 summit. The day included the "best meeting" between Donald Trump and Emmanuel Macron. Here are the key developments going into Day Two. 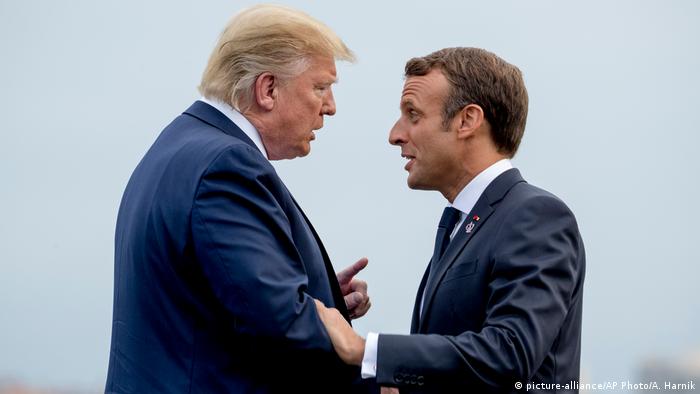 The leaders of the US, France, Germany, Japan, the UK, Italy and Canada — the world's seven largest, IMF-designated advanced economies — have gathered in southern France for the year's G7 summit on Saturday amid mass protests. Here's a wrap-up of Day One and what's expected from Day Two on Sunday.

Typically, the G7 summit ends with a final statement signed by all the participants. However, that will be skipped this year in order to avoid disagreements over content and language.

US President Donald Trump walked out early from last year's G7 summit in Canada over criticism of his tariffs policy and then refused to sign the final statement.

On Sunday, bilateral sessions are scheduled to take place between world leaders: Trump will meet with UK Prime Minister Boris Johnson Sunday morning for the first time since the latter took office, with a possible post-Brexit trade deal to be discussed.

Just before the summit, UK Prime Minister Boris Johnson and European Council President Donald Tusk traded barbs over the UK's exit from the European Union. Tusk said he would not negotiate a no-deal scenario, and said he hoped the PM did not want to go down in history as "Mr No Deal."

Johnson responded to Tusk by saying, "If Donald Tusk doesn't want to go down as 'Mr No-Deal Brexit,' then I hope that point will be borne in mind by him too." The pair are set to have private talks on Sunday.

Johnson announced that he would tell Trump to pull back from his trade war with China, which is having major repercussions on the global economy. Trump had announced additional duties on Chinese imports one day before he arrived in France.

Trump threatened to levy import duties on French wine "like they've never seen before" after Macron spoke unfavorably about Trump's trade policies. However, the US president tweeted that their joint lunch was "the best meeting we have yet had."

The initial working session on Sunday will focus on trade — a contentious area given Trump's escalating trade war with China.

More than 9,000 anti-G7 protesters marched peacefully over a bridge linking France and Spain about 30 kilometers (18 miles) from Biarritz. However, separate demonstrations in the nearby town of Bayonne later turned raucous, with police using water cannons on protesters.

Tusk reiterated that Russia had no place in the G7, despite Trump's desire to readmit the country. This backs up statements from France, Germany and Britain earlier this week. Tusk said it would be better to have Ukraine instead of Russia.

After sitting down for a one-on-one lunch with Trump, Macron said he would like to cooperate on emissions reductions, despite the US president holding different views on climate change.

Trump pulled out of the Paris Climate Agreement in 2017, shortly after he attended his first G7 in Italy.

Macron has invited leaders from Australia, Chile and Spain to attend a Sunday night dinner to discuss environmental challenges.

The European G7 nations, as well as other EU members such as Ireland and Spain, sparred over whether to block the EU-Mercosur free trade agreement unless Brazil's President Bolsonaro takes forceful action on the forest fires raging in the Amazon and on climate change in general.

Macron said that the US and France share the same objective on Iran: to prevent the country from getting nuclear weapons. Trump took the US out of the Iran nuclear accord in 2018, leaving European signatories scrambling to preserve the pact.