The French president’s office has said there is no place for anger and insults in international cooperation. The Elysee Palace issued its statement after US President Donald Trump torpedoed a G7 summit agreement. 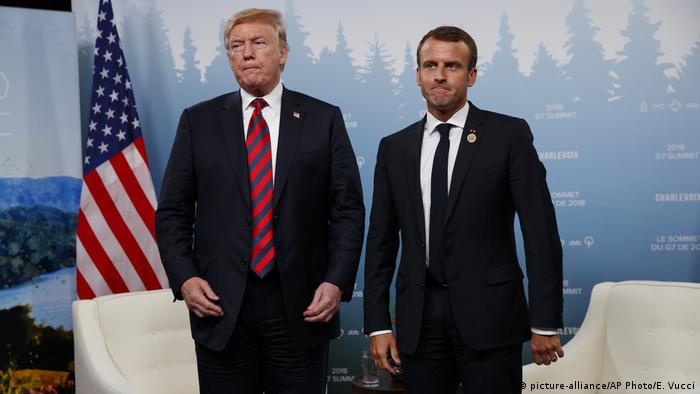 French President Emmanuel Macron's office on Sunday stressed the need for calm heads after the G7 summit ended in a fiasco in the Canadian town of Charlevoix.

The Elysee Palace was responding to questions about the outcome of the summit, after US President Donald Trump refused to give his backing to a joint declaration, despite hours earlier signing the communique.

Trump, who departed the summit early, also accused Canadian Prime Minister Justin Trudeau of being "very dishonest" in his condemnation of US tariffs.

In a flurry of tweets from Air Force One, Trump — on his way to a meeting in Singapore with North Korean leader Kim Jong Un — also announced that he was withdrawing his support from the declaration.

No place for Trump's anger

Macron's office stressed that France and Europe maintained their support for the communique, saying there was no place for anger on the circuit of international diplomacy.

"International cooperation cannot be dictated by fits of anger and throwaway remarks," the Elysee Palace said.

"Let's be serious and worthy of our people. We make commitments and keep them," the presidency said, adding that "France and Europe maintain their support for this statement."

The office of German Chancellor Angela Merkel also said it stood by the communique.

Foreign Minister Heiko Maas said on Sunday the US president's tweets had destroyed trust and Europe should answer by staying even closer together: "It's actually not a real surprise, we have seen this with the climate agreement or the Iran deal," Maas said about Trump's decision.

"In a matter of seconds, you can destroy trust with 280 twitter characters," Maas remarked, while it would take much longer to rebuild it.

Trump lashes out at Trudeau

Trump's change of heart appeared to have been invoked by Trudeau's comments on Trump's steel and aluminum tariffs against Canada and other allies. Trudeau said Trump's citing of "national security" as a reason for the levies being imposed was "kind of insulting" to Canadian veterans who had stood by their US allies in conflicts dating back to World War I.

Trump unleashes tweetstorm against Trudeau on heels of G7

The statement that Trump reneged on was also signed by the heads of government of Britain, Canada, France, Germany, Italy and Japan, all of which have also been hit by the US tariffs of 25 percent on imported steel and 10 percent on aluminum.

The communique signed by the leaders agreed on the need for "free, fair and mutually beneficial trade" and the importance of fighting protectionism.