World leaders are gathered in Biarritz for the annual G7 summit. Here are the key developments from day two. 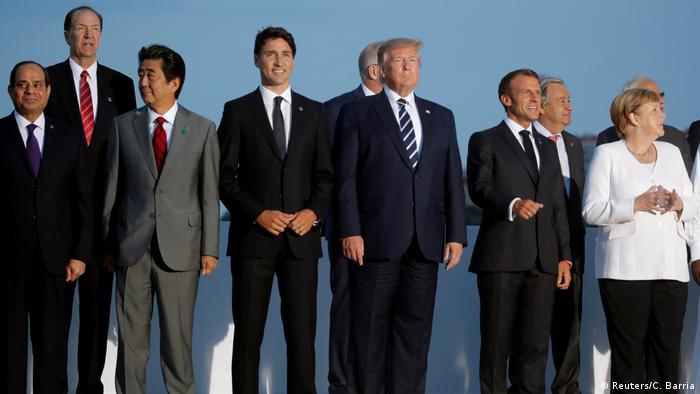 The G7 summit wrapped up its second day on Sunday, with the leaders of the US, France, Germany, Japan, the UK, Italy and Canada nearing agreement on the fires raging in the Amazon rain forest.

Here is a wrap-up of day two.

Angela Merkel said German officials would talk with Brazilian authorities about Amazon reforestation. "The lungs of our whole Earth is affected," the chancellor said, "and so we must find common solutions."

Iranian Foreign Minister Mohammed Javad Zarif paid a surprise visit to meet with Macron. Zarif, sanctioned by the US, said salvaging the 2015 nuclear deal would be difficult but "worth trying."

His unexpected and brief visit came as Macron reportedly gained the blessing of leaders to pursue efforts; however, Macron later denied that he had any such "mandate."

Donald Trump vowed to work out a "very big trade deal, bigger than we've ever had" with the United Kingdom after Brexit. The US president said the British would lose "the anchor around their ankle" after leaving the EU.

"We're looking forward to having some pretty comprehensive talks about how to take forward the relationship in all sorts of ways, particularly on trade," UK Prime Minister Boris Johnson said. Last week he'd found a less-appeasing negotiating partner in Merkel.

Other countries join in

Macron invited African leaders to discuss problems, and officials from India, Australia, Chile and Spain joined for dinner Sunday. Talks focused the environment and other issues.

US officials said Macron had shifted the focus to "niche issues" rather than major global concerns. French authorities denied this, pointing to Sunday's initial session, which covered the economy, trade and security — areas that used to draw easy consensus but have become sources of great friction.

Several hundred anti-G7 protesters carried upside-down portraits of Macron as part of a climate and social justice march. Authorities said 19 people were arrested as part of the the beefed-up security plan

The US-China trade war and forest fires in the Amazon are set to dominate the latest G7 summit in France. President Emmanuel Macron is doing everything he can to prevent a total debacle, but it's no easy task. (24.08.2019)