Trump′s Japan visit: Shinzo Abe′s calculated pampering of a president | Asia| An in-depth look at news from across the continent | DW | 24.05.2019 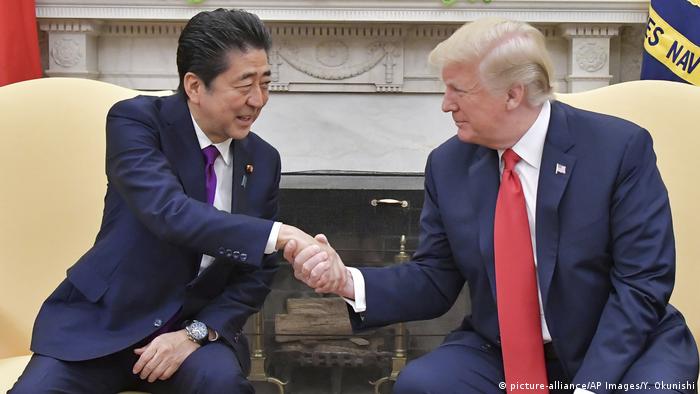 The Japanese government is showing ingenuity in preparing an impressive state visit for US President Donald Trump. After his arrival in Japan on Sunday, Trump will take the ringside seat of honor at the final match of a gala two-week-long Sumo wrestling tournament. Instead of using the traditional floor pillows, the 72-year-old Trump will sit comfortably in a chair. After the match, Trump will present the trophy to the winner, which was customized to honor US-Japanese friendship and is unofficially named the "Trump Cup."

The ceremonial high point of Trump's visit will be on Monday, when the president will meet Japan's newly ascended Emperor Naruhito. Trump will be the first foreign guest to meet the new monarch.

The imperial couple will also host a state banquet on the same evening. Naruhito took over the royal duties on May 1 from his father Akihito. When Naruhito's crowning ceremony in front of heads of state from around the world takes place on October 22, Trump will not need to wait in line to meet the monarch for the first time.

With these special honors, Prime Minister Abe is trying to win the favor of the US president and strengthen the coalition between Tokyo and Washington. Unlike European politicians, Abe tried right away to create a close personal relationship with Trump and quell some of the US president's reservations regarding security and trade relations with Japan.

By stroking Trump's ego, Abe hopes to coax the US president into going easy on Japan when it comes to the tougher points in bilateral relations. The last item on Trump's itinerary demonstrates Abe's tactic.

On Tuesday, Abe and Trump will travel together to the US Marine base Yokosuka to inspect one of two Japanese Izumo-class helicopter carriers. Modifications are planned so that both ships can serve as a carrier for stealth bombers.

To build up its air arsenal, Japan is buying 42 F-35B stealth fighter jets from US aerospace manufacturer Lockheed Martin. Tokyo will also receive a delivery of 42 F-35A jets, which were ordered earlier, and 63 additional aircraft of the same model.

The visit to Yokosuka is expected to remind Trump that Japan is a good customer of US military equipment. With these expensive purchases, Japan can reduce its trade deficit with the US, and respond to Trump's demands for "fair and reciprocal" trade. At the same time, Japan can lessen pressure from the US in bilateral negotiations over a trade agreement.

"Japan is aiming to make as little concessions as possible in trade talks," political scientist Sebastian Maslow from the University of Tokyo told DW.

It looks like the Japanese tactics have paid off. It had taken more than two years before talks began between top US trade negotiator Robert Lighthizer and Japanese Trade Minister Toshimitsu Motegi.

At their meeting in April, the two negotiators kept the agenda limited to automobiles and agricultural goods. Import quotas for cars and currency issues were excluded.

Japan also didn't give into pressure to announce the conclusion of talks when Trump and Abe hold a summit on Monday. The US had no response to Tokyo's request to wait until Japan's parliamentary elections in July before closing an agreement with the US.

The US wants favored import conditions for its agricultural products from the Japanese, but this could have a detrimental effect on Japanese farmers, who belong to the ruling liberal democrat's core electorate. To Washington's surprise, Tokyo also expects a reduction in US customs for Japanese cars and car parts.

The positions of both sides diverge here considerably. There aren't any major agreements expected for Monday's summit, aside from a mutual commitment to see negotiations through to the end. One potential agreement on the table is Japan's participation in a US space mission, for example, to the moon.

Japan's self-confidence is bolstered by the fact thatUS agrarian lobby puts pressure on its own negotiators, as US exporters of beef and pork have considerably lost market share in Japan.

On January 1, the trade pact with ten Pacific Rim states (TPP-11) came into force, and on February 1, the free trade agreement with the EU began. Both agreements led to decreasing import taxes for meat.

The US agrarian lobby would have been satisfied if they had got the same conditions. However, before the summit, the Japanese lifted all the remaining import bans on US beef as a gesture of partnership.

Japan has its own agenda on China

Against the backdrop of the US-China trade dispute, Abe can be expected to act independently from US pressure. He has been able to establish an independent Japanese position as the trade tension between the US and China continues. China is Japan's most important trading partner and a key market for many Japanese companies.

In an atmosphere of thawing political relations, Japan and China want to strengthen bilateral economic and technological cooperation.

An "iron curtain" cutting off Chinese tech and development from the world is not in Japan's interest — even if Trump puts pressure on Japan to support the US position in the trade war with China.

"Trump needs to pull Japan to his side in the trade conflict in order to increase pressure on Beijing," analyst Maslow said. But to get this done, Trump must first reduce pressure on Tokyo.