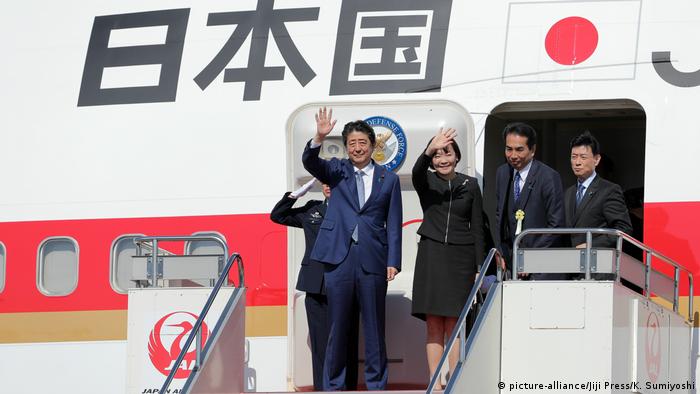 When Japan's PM Shinzo Abe shakes hands with Chinese President Xi Jinping in Beijing on Friday, it will mark the first bilateral Sino-Japanese summit since 2011. The meeting comes shortly after the 40th anniversary of the 1978 Treaty of Peace and Friendship between the two nations. Abe's three-day China trip is the culmination of a rapid rapprochement between the two sides that began in the spring with the resumption of their economic dialogue.

China is Japan's biggest trading partner and many Japanese companies have invested large sums in China.

Eyeing economic benefits, Abe has long sought to improve Tokyo's relations with Beijing. But the Chinese leadership for years spurned these overtures and showed little interest in revitalizing the relationship between the world's second and third-largest economies. 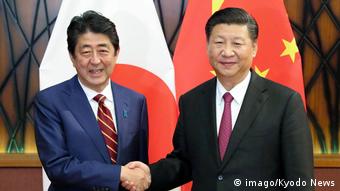 But China's ongoing trade dispute with the US, with both sides imposing tariffs on each other's products, prompts the leadership in Beijing to reconsider their approach toward Tokyo.

Fearing international isolation, President Xi has sought to join forces with the European Union, Russia and, also, Japan. One of Beijing's core concerns is that the US would attempt to constrict China's role in global trade, said Wu Junhua, director of the Japan Research Institute in Tokyo.

The new free trade agreement for North America that the US negotiated with Canada and Mexico contains a clause directed against China, Wu noted, pointing out that Canada and Mexico will require US approval if they want to conclude their own free trade deals with so-called non-market economies.

Washington could include such a clause in its trade negotiations with the EU and Japan, said Wu. "Such a move would force these economies to opt for or against China."

Trump's approach to global trade has put tremendous pressure on not just China, but also Japan. Fears abound in Tokyo about the US slapping tariffs on Japanese cars. Washington's tariffs on Chinese goods have also hurt Japanese companies by raising the cost of business across global value chains. Chinese orders for Japanese machine tools dropped more than a fifth in September compared to the orders in the same month during the previous year. Analysts attribute this slowdown to growing reluctance among firms in China to invest.

Ties between China and Japan have taken a positive turn over the past several months. This was on display during the recent meeting between Xi and Abe at a gathering in September in Russia's far-eastern city of Vladivostok.

There the Japanese leader urged the Chinese president to lift the import restrictions on food from Fukushima. Xi responded to this request by remarking that Japanese rice "is delicious." Such a remarkably positive comment from China's leader after years of Beijing cold-shouldering its eastern neighbor should be seen as an indication of Chinese willingness to bury the hatchet with Tokyo, say analysts.

During their meeting, Abe and Xi will likely agree on new collaborations in the fields of finance, infrastructure and digital technologies. Hundreds of Japanese business leaders are accompanying Abe during the trip.

When he meets with Chinese Premier Li Keqiang, Abe is expected to suggest ending Japanese development aid to China. He instead wants Japan and China to organize joint infrastructure projects in third countries. More than 30 such projects have already been earmarked and will be signed off in Beijing.

In addition, currency swaps between the central banks of the two largest Asian economies are to be resumed and expanded tenfold to about 3 trillion yen (€23.2 billion, $26.45 billion). In the event of turbulence on the financial markets, these swaps serve as a safety net, granting Japanese banks in China access to yuan while allowing the Chinese to get hold of yen.

The previous swap agreement between the two sides expired in 2013.

Roundtables on technological cooperation under the working title "Innovation and Intellectual Property Dialogue" will likely serve as another building block for better Sino-Japanese relations.

They will take place for the first time this year as part of the economic dialogue.

Seven working groups will deal with, among other things, the digital economy, industrial cooperation, innovation and intellectual property rights. Still, it's unclear how much technology sharing both sides will eventually agree upon, say analysts.

Defense is likely to be another field of Sino-Japanese cooperation.

The chief of the Japanese armed forces is expected to visit China for the first time since 2008. In addition, Japan is considering receiving high-ranking Chinese military officials.

Both sides are also working on the details of setting up a hotline between their militaries. The decision to set it up was taken in June, in a bid to avoid unwanted clashes, particularly in the East China Sea. Beijing and Tokyo have unresolved territorial disputes involving a group of uninhabited islands, called Senkaku in Japan and Diaoyu in China. They are currently administered by Tokyo, but Beijing claims sovereignty over them.