Japan commits to China's 'One Belt, One Road' initiative

PM Shinzo Abe sees opportunities for Japanese companies in the ambitious economic development plan, but he also fears not taking part may mean Tokyo being sidelined by increasingly wealthy and influential Beijing. 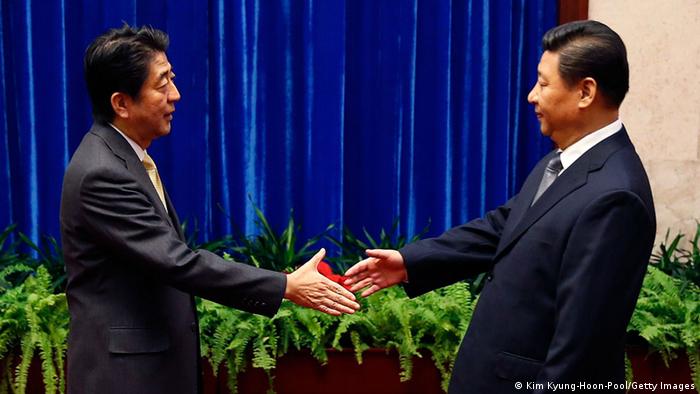 During talks with Chinese President Xi Jinping on the fringes of the recent G20 summit in Hamburg, Japanese Prime Minister Shinzo Abe expressed Tokyo's intention to participate in Beijing's ambitious "One Belt, One Road" economic plan, a significant concession from a government that had previously distanced itself from Chinese economic and development initiatives.

Analysts say that while the Japanese leader is hoping for a windfall for domestic companies, he also recognizes that Japan simply cannot afford to be left out of a growing international project without any say in its future direction. Yet another motivation is to pressure President Donald Trump's administration to re-engage with its longstanding allies in the Asia-Pacific region instead of permitting China to seize the initiative.

The grand One Belt, One Road project is a combination of the Silk Road Economic Belt and the 21st Century Maritime Silk Road, and is designed to promote connectivity and cooperation among Eurasian nations via land and sea. The project demonstrates China's quest to play a larger role in global affairs and coordinate manufacturing throughout the region.

Initially announced in September 2013, the plan envisages six land corridors, including a land bridge between Western China and Western Russia as well as a route linking China to the Middle East through the Central Asian republics. The land routes will be supported by the Maritime Silk Road, which will connect Chinese ports with those in Singapore, India, Pakistan, the Middle East and eventually the eastern Mediterranean.

Around 60 countries are involved, including nations in East Africa and Oceania, with a cumulative estimated investment of as much as $8 trillion.

The architects of the plan see it as a way to bridge the "infrastructure gap" and thereby accelerate economic growth in every participating nation. The construction of rail links, roads and port facilities will help form a cohesive economic area that will also benefit from increased trade and cultural exchanges.

Previously, Japan had been reluctant to commit to the plan. For years, it has provided development assistance and loans to many of the signatories to China's belt plan and now it fears its aid is being eclipsed.

Tokyo was also unhappy with the creation of the Asian Infrastructure Investment Bank (AIIB) in 2015, which China set up to assist developing nations. Japan believes the new entity encroaches on the activities of the Asian Development Bank, which fulfills similar functions and was jointly set up by Japan and the US in 1966.

Japan has declined to become a founding member of the AIIB, and was disappointed that Britain, France, Germany, Italy and Australia had all promptly signed up.

"The 'One Belt, One Road' scheme is a cause for concern for Japan on several levels," said Stephen Nagy, a senior associate professor of international relations at Tokyo's International Christian University.

"If Japan does not take part, then it will lose out on infrastructure development projects that will then be monopolized by Chinese companies," he told DW. "Some huge numbers are being suggested in terms of the investment and if Japanese firms only get five percent of that work it will still be a big bonus to them.

For Southeast Asian countries, an increased economic cooperation with China can be a double-edged sword. Beijing's investment initiatives are not only aimed at regional connectivity, they also seek ideological hegemony. (24.04.2017)

"Japan also believes it can ensure a greater degree of transparency in the organization if it is on the inside, while membership will also allow Tokyo to take part in making decisions on how the scheme goes forward; being on the outside would mean Japan is excluded from making decisions and will be reacting to what others have decided."

Arguably the most important motivation for Tokyo, given the regional instability in recent years, is to apply pressure on the US to once again become a significant player in the region.

"Tokyo is sending a signal to Washington that it is willing and able to diversify its relationships in the region and that it is not relying solely on the US any more," Nagy said.

He pointed out that Washington downgrading its role and commitment to the region benefits neither the US nor most of the Asia-Pacific region, although China and North Korea would almost certainly welcome Washington's retreat.

"This withdrawal of the US from Asia is a real problem for Japan, for economic and security reasons," said Robert Dujarric, director of the Institute of Contemporary Asian Studies at the Tokyo campus of Temple University.

"Japan feels that it has been stabbed in the back by the US pulling out of the Trans-Pacific Partnership free trade deal and it is exploring other options," he said. "And most other countries in the region would far rather that Japan and China be on good terms because no one wants more chaos.

"Japan has always been a trading and investing nation and the 'One Belt, One Road' proposal offers good opportunities for Japanese firms," he said.