Emmanuel Macron proved himself to be a master of diplomacy at this year's G7 by outmaneuvering the US President on Iran. In doing so, he's also taken over as Europe's foreign policy leader, says DW's Barbara Wesel. 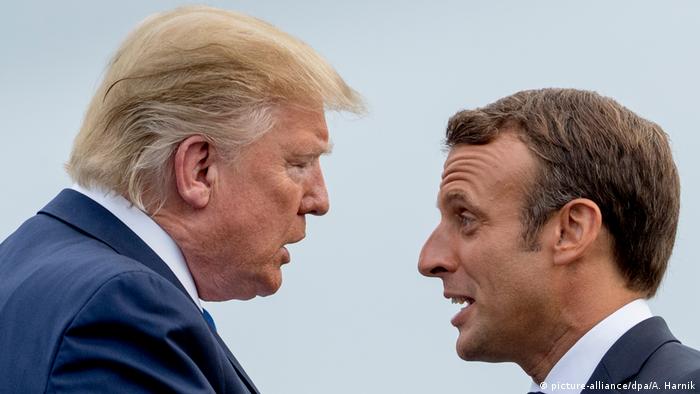 The French president invested an enormous amount of preparation time and political capital so that this year's G7 summit would not turn into an all-round debacle and total failure. He invited additional guests and brought other topics to the table to shake up the meeting's rigid format.

Above all else, Emmanuel Macron did not want to be seen as a failure himself — and with some effort, he managed to do that.

Macron actually managed to outmaneuver the stubborn and contrarian US president on Iran. That's no small feat considering Donald Trump once again proved to be a bad guest who enjoyed misleading the press and bystanders — particularly on trade policy.

At the same time, Trump complained about the media reporting on tensions at the summit. Any additional words written about the U-turns, the irresponsibility and distortions from Trump's side would be a waste. He simply behaved as he always does.

The French president invited Iranian Foreign Minister Mohammed Javad Zarif as a surprise guest and launched a diplomatic initiative on the sidelines of the summit — and he did that right under Donald Trump's nose.

Trump then reacted angrily and emphasized that the only correct strategy is the US' hard-line approach. The French president didn't allow himself to be intimidated, instead, meeting personally with Zarif to see whether there could be diplomatic leeway for new solutions.

There's not much hope there, but in a situation where a military conflict is threatening to erupt in the background, every effort for a peaceful resolution is welcome. That also goes for the European signatories of the 2015 Iran nuclear deal that the US president pulled out of with a bang last year.

Macron also took the right approach in tackling the fires in the Amazon rainforest. He threatened Brazilian President Jair Bolsonaro by refusing to ratify the EU-Mercosur trade agreement if Bolsonaro did not stop people from igniting fires in the forest known as the Earth's green lungs.

At the summit, he also persuaded other participants to promise Brazil and its neighboring countries practical aid to help put out the fires and assist in reforestation.

The French president showed that he has the right methods to deal with populists and anti-democrats. He speaks with everyone, but also draws hard lines. Bolsonaro meanwhile proved that the carrot-and-stick approach works, since he gave in and sent the military to extinguish the fires.

In order to persuade the Brazilian leader to adopt a more responsible environmental policy, much more pressure will be needed. In order to achieve this, the EU, environmental organizations and ultimately consumers have a role to play if it comes to boycotting Brazilian products.

The US was furious that Macron even put the topic of climate change and the Amazonian fires on the agenda at all. They felt backed into a corner, diplomats said. Washington once again showed that it acts completely irresponsibly when it comes to climate policy and has to be led along by the other G7 countries.

The French president showed that he is a political craftsman who wants to make himself a leading figure in Europe. From a digital tax to climate policy, many important initiatives are coming from Paris.

Germany, on the other hand, is looking increasingly bad. It appears the political Götterdämmerung in Berlin has also crippled Chancellor Angela Merkel's experience and desire to lead.

Her weakness is leading to a passing of the baton in the EU. Macron has already pulled the strings when it came to the selection of the new European Commission president. He is on his way to becoming Europe's new strong man, but he has to be careful not to overextend himself or lose his feet.

After this year's difficult G7 summit, though, you have the feeling that you're in good hands with Macron.