Germany's Angela Merkel and France's Emmanuel Macron stressed the need for a "coordinated European solution" to migrant arrivals from the Mediterranean. They also voiced concern for the humanitarian situation in Syria. 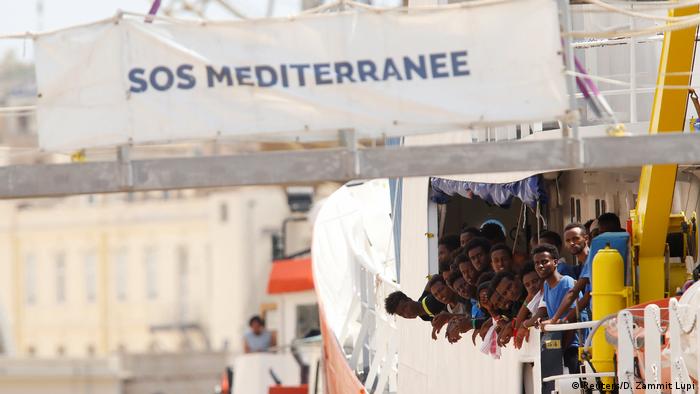 German Chancellor Angela Merkel and French President Emmanuel Macron spoke via telephone about the issue of migrants rescued in the Mediterranean Sea, the Elysee Palace said on Friday.

The conversation comes after the NGO ship Aquarius was denied entry by multiple coastal European states. It instead docked in Malta after five EU members — France, Germany Spain, Portugal and Luxembourg — offered to take the 141 refugees on board who were rescued off the coast of Libya.

Both Merkel and Macron called for a "coordinated European solution" in regards to the intake of rescue ships and an approach to smugglers, the Elysee Palace said.

Italy has refused to allow private ships docking rights at its ports, saying that the rescue ships need to dock in Libya or other EU member states. In June, the country turned away the Aquarius, which forced the rescue ship, operated by SOS Mediterranee and Doctors without Borders (MSF), to travel 1,500 kilometers (810 nautical miles) before docking in Spain.

Italy has accused private rescue ships of encouraging smugglers to pack migrants into shoddy boats, knowing that the ships will rescue them. Prosecutors in Sicily are currently investigating more than 20 rescue workers for assisting with illegal immigration, including 10 crew members of the impounded ship Iuventa belonging to German NGO Jugend Rettet.

Merkel and Macron also discussed Ukraine and the war in Syria in their telephone conversation, specifically the growing humanitarian crisis in the rebel-controlled Idlib province in Syria.

Idlib, located in northern Syria, is shaping up to be the next battleground in the country's seven-year civil war as government forces have stepped up their bombardment of rebel positions in recent days.

The two European leaders agreed the "humanitarian risks" in the region are "very high" and said there is a need for an "inclusive political process to allow lasting peace in the region," the French government said.

In addition to Syria, Merkel and Macron also conversed about Ukraine ahead of the German chancellor's meeting with Russian President Vladimir Putin at Meseberg Palace outside Berlin on Saturday.

Germany and France want UN troops deployed in all areas controlled by Russian-backed separatists, including along the Russia-Ukraine border. Russia is opposed to the idea.

Speaking on Friday, Merkel warned against expectations that her meeting with Putin will produce a breakthrough, saying the meeting is a product of necessity rather than choice.

"It's a working meeting from which no specific results are expected. But the number of problems that occupy us — from Ukraine and Syria to the issue of economic cooperation — is so big that it is justified to be in a permanent dialogue," said Merkel, who last met with Putin in Sochi in May.

Russia annexed Ukraine's Crimean peninsula in 2014, increasing tensions between the two countries and sparking a conflict between separatists and Ukrainian forces.

The German chancellor's return to work has come with a number of foreign policy challenges. Migration has dominated her agenda of late, while disagreements over Ukraine and Syria continue to fuel tension with Russia. (13.08.2018)

Angela Merkel in Spain for talks on refugees, migrants