War and fuel: Angela Merkel′s headaches in Russia talks | Germany | News and in-depth reporting from Berlin and beyond | DW | 18.08.2018

Vladimir Putin is meeting Merkel outside Berlin on Saturday to discuss Syria, Ukraine and the Nord Stream 2 pipeline with Angela Merkel. But what can the two seasoned leaders hope to say that they haven't said before? 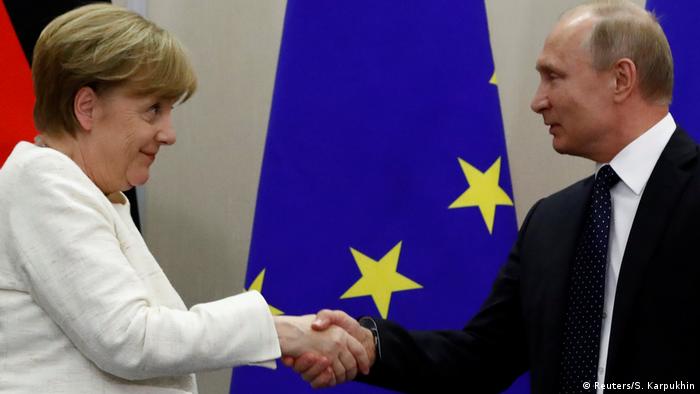 Angela Merkel and Vladimir Putin clearly have a lot to talk about. For the second time in three months, the German chancellor and the Russian president are getting together for a bilateral meeting. This time, after Merkel visited the Black Sea resort of Sochi in May, Putin is in the German government's retreat in Meseberg, a picturesque castle outside Berlin.

Why exactly the two leaders should choose to meet again this weekend is unclear — though it could have something to do with the fact that Merkel's government, having just survived a domestic political crisis before the summer break, now has its mind clear for foreign policy, an area that plays to the chancellor's long experience.

At first glance, there would seem to be endless topics for the two long-serving leaders to discuss — Russian interference in the US election, or the alleged poisoning of former Russian spies in the UK, for instance — but on Monday Merkel's spokesperson Steffen Seibert named three key topics the pair would concentrate on: Syria, Ukraine and the Nord Stream 2 pipeline.

Sabine Fischer, head Eastern Europe and Eurasia researcher at the German Institute for International and Security Affairs (SWP), is not particularly optimistic that the talks will bring any substantial new breakthroughs. "The aims haven't changed," she told DW. "Russia has its positions on Syria, Russia has its position on Ukraine, Russia has a strong interest in realizing Nord Stream 2, and the Russian side will continue to pursue these aims."

The conflict in eastern Ukraine has claimed at least 10,000 lives since it began in early 2014. In that time, Moscow has annexed the Crimean peninsula and there is evidence that Russian troops are fighting alongside the pro-Russian separatists who currently control the country's eastern regions.

Along with France, Germany has been trying to mediate a ceasefire between the Ukrainian government and these separatists, which would theoretically be policed by United Nations blue helmets — though how exactly it would be implemented remains a subject of keen debate.

Last year, Putin suggested that the blue helmets should not be on a peace mission, but simply be a protective force for the Organization for Security and Cooperation in Europe (OSCE), the international organization that is currently monitoring the oft-broken ceasefire in the region.

That has led to more intensive talks, "but that is just something that is being discussed on various levels, without any agreement," said Fischer. "There is a readiness to talk, but I don't see a readiness to come to any real compromises from the Russian side."

"What Merkel is trying to do right now is manage some de-escalation in the Sea of Azov [off the southern coast of Donbass]," said Olaf Böhnke, senior advisor at the political consultancy Rasmussen Global. "We've seen an escalation between Ukrainian and Russian navy forces recently in this part of the Black Sea." 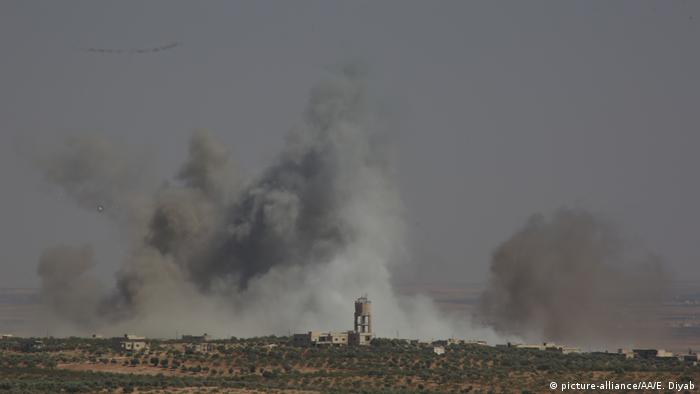 The Syrian government has been carrying out airstrikes in Idlib

Meanwhile, it's even harder to see how Merkel and Putin could feasibly make progress on the Syrian war, an even longer, even bloodier and even more intractable conflict. Still, the two leaders will hope to prepare the ground for a four-way summit on September 7, hosted by President Recep Tayyip Erdogan of Turkey, and attended by France, Germany and Russia.

High on the agenda at the moment, however, will be the situation in Idlib, northwestern Syria, where President Bashar Assad is launching a major new offensive. Merkel and her other allies, including Turkey, will be hoping that Assad can be pressured to stop a fresh massacre there. "I think she will try to at least buy some time here and try to convince him not to give a green light to Assad to terminate Idlib for the time being," said Böhnke.

Putin remains Assad's closest ally among major world powers, and after a US missile strike on Syrian chemical weapons facilities in April, the Russian leader announced that Moscow would equip Syria's army with high-tech S-300 air defense missiles — though he then retracted the offer.

But, as far as Fischer of SWP is concerned, that doesn't mean that Russia is taking a more conciliatory position on Syria. "Putin has signaled a withdrawal from Syria several times, but these have always turned out to be partial withdrawals, in the best cases," she said. "Altogether, Putin often tried to reduce his engagement, but only strongly on his own terms — and that's where things stay stuck."

Read more: Nord Stream 2: what is the controversy about?

Another thorny German-Russian issue is the Nord Stream 2 pipeline — a 1,200-kilometer (750-mile) infrastructure project which Russia wants to use to sell gas to Germany. But that, as Fischer points out, doesn't mean that the two countries completely agree on the issue.

The pipeline remains controversial even in Germany, while Ukraine fears that it will have serious geopolitical consequences, because Russia will be more able to cut off the country's gas supplies without losing revenue — Merkel herself admitted to Ukrainian President Petro Poroshenko that Nord Stream 2 would have geopolitical consequences. She has since demanded from Russia that Ukraine be given assurances that supplies would not be cut off.

"It's a very interesting case because on the one hand they're business partners, and there are a lot of economic interests on both sides," said Böhnke. "On the other hand there is the question of transit guarantees for the Ukrainians, which was already brought up by Merkel — but interestingly enough they did not give us any numbers."

Syrian forces have warned rebels of an impending assault on Idlib — the last major bastion of opposition to President Bashar al-Assad in the Syrian civil war. Leaflets were dropped advising people the surrender. (09.08.2018)

A week after Chancellor Angela Merkel paid a visit, her French counterpart Emmanuel Macron made his first trip as president to Russia. Macron highlighted plans to work on joint initiatives. (24.05.2018)