A week after Chancellor Angela Merkel paid a visit, her French counterpart Emmanuel Macron made his first trip as president to Russia. Macron highlighted plans to work on joint initiatives. 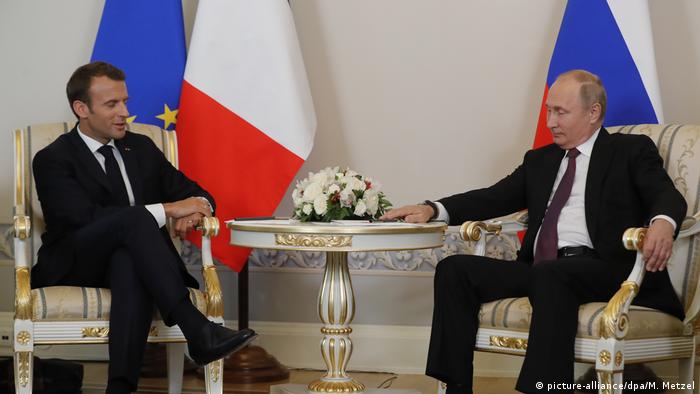 Russian President Vladimir Putin welcomed Macron to St. Petersburg on Thursday for a two-day visit saying he was ready to talk about "key international issues, the resolution of which are important to both France and Russia."

Ahead of the talks, Macron said he believed France and Russia "must work together on joint initiatives."

As the two men appeared to make a statement after their meeting, a series of agreements on culture, nuclear energy, Arctic development and finance were announced. Putin said 500 French companies were working in Russia.

Asked by a journalist present about the report into the shooting down of the Malaysia Airlines aircraft over Ukraine, Putin asked which airline he was referring to: "We proposed a joint investigation, but Russia was not allowed to participate, so we don't know what this investigation's findings are," Putin said. "We will read the conclusions and respond."

The two presidents met a year after Macron welcomed Putin to the Palace of Versailles, just outside Paris in May 2017.

Macron referred to the historical links between Russia and France, and stressed reconciliation going forward. Macron said there was an obligation to defend France's independent multilateralism in international relations. "I hope we can move forward together," while respecting the sovereignty of other peoples, Macron said. "We must continue to build joint trust." 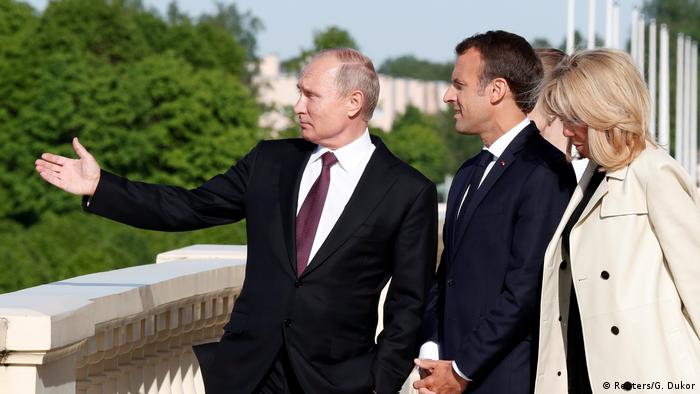 Following Merkel, ahead of Abe

Chancellor Angela Merkel met Putin in Moscow last week to discuss, among other issues, the Nord Stream 2 gas pipeline, the Iran nuclear deal, Syria, Ukraine, and how to safeguard bilateral trade relations amid EU and US sanctions.

Also on his way to Russia on Thursday, Japan's Prime Minister Shinzo Abe had trade on his agenda for talks with Putin during his three-day visit. Joint economic projects on the disputed southern Kuril islands in the northern Pacific, which Japan calls the Northern Territories, are also on the agenda.

Russia took the islands at the end of World War II, expelling 17,000 Japanese residents to nearby Hokkaido. As a result, no treaty has yet been signed to formally end hostilities between Russia and Japan.

Macron and Abe will be the St Petersburg forum's guests of honour. The central theme is "Creating an Economy of Trust" with discussions on trade, investment, finance, energy, technology, demographics and environmental protection.

After Russia annexed Ukraine's Crimea peninsula in 2014 and destabilized eastern Ukraine, the EU imposed restrictive measures against Moscow while pressing for the implementation of the 2015 Minsk agreements.

The EU applied asset freezes and visa bans on 149 Russian individuals and the EU assets of 38 Russian entities were frozen. There were bans imposed on EU nationals and companies for financial cooperation with Russian banks, energy and defense companies. A ban on military exports, dual-use goods and technology for military use in Russia among other items was also imposed.

The EU sanctions over Russian actions against Ukraine's territorial integrity were extended in March until September 2018. "An assessment of the situation did not justify a change in the sanctions regime," the European Council said at the time.

When Angela Merkel meets Vladimir Putin in Sochi, there will be new common ground to discuss: Germany and Russia both want to save the Iran deal. Beyond that, however, there are some serious differences. (17.05.2018)

In retaliation for a chemical weapons attack in Douma, US President Donald Trump has said the US military launched strikes on Syrian chemical weapons capabilities. Russia has warned of "consequences" for the strikes. (14.04.2018)