In retaliation for a chemical weapons attack in Douma, US President Donald Trump has said the US military launched strikes on Syrian chemical weapons capabilities. Russia has warned of "consequences" for the strikes.

—  The US, UK and France have launched precision airstrikes on military and chemical research sites in Syria in retaliation for the Syrian government's alleged use of chemical weapons on civilians last week.

—  Both the Syrian government and its ally Russia have condemned the attack as a violation of international law.

—  The US has said that any future strikes would depend on whether or not further chemical attacks are carried out but that the country does not seek an "indefinite presence" in Syria.

President Donald Trump announced on Friday that the United States, United Kingdom and France had launched precision strikes on Syrian military sites believed to be housing chemical weapons facilities following last week's chemical weapons attack in Douma, which the US said was carried out by Syrian President Bashar Assad's forces.

"The evil and the despicable attack left mothers and fathers, infants and children thrashing in pain and gasping for air," Trump said of the attack. "These are not the actions of a man. They are crimes of a monster instead."

Reports of loud blasts were heard in the Syrian capital of Damascus during Trump's speech. The airstrikes began around 4 a.m. local time in Syria (0100 UTC), turning the sky over eastern Damascus orange. According to the Syrian Observatory for Human Rights, a UK-based monitor, the strikes struck a number of military bases and a scientific research center.

Russia's ambassador the United States, Anatoly Antonov, said "such actions will not be left without consequences" and that "all responsibility for them rests upon Washington, London and Paris."

The Russian Foreign Affairs Committee also added that the Syria strikes were an attempt to block a probe by the Organization for the Prohibition of Chemical Weapons (OPCW), which was scheduled Saturday to begin looking into the alleged poison gas attack. Moscow also condemned the airstrikes as a violation of international law.

Syrian state media slammed the strikes as a "flagrant violation of international law" and "doomed to fail." It added that three civilians had been injured during the attack on the military base in Homs, while another strike on a scientific research center was restricted to material losses.

Over the last few days, Trump had met with military advisers and conversed with allies to decide how to respond to the use of chemical weapons in the eastern Ghouta city of Douma outside of the capital. 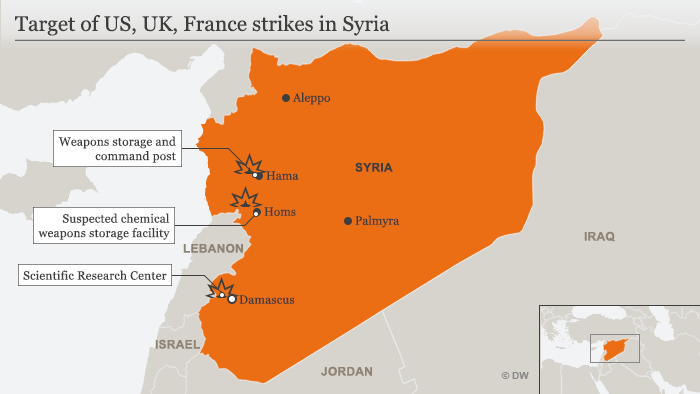 "We are prepared to sustain this response until the Syrian regime stops its use of prohibited chemical agents," Trump said, adding that he did not want to maintain an "indefinite" US presence in the region.

"The purpose of our actions tonight is to establish a strong deterrent against the production, spread and use of chemical weapons."

Following Trump's announcement, British Prime Minister Theresa May released a statement saying the UK had "no alternative" but to use force in Syria. "We cannot allow the use of chemical weapons to become normalized — within Syria, on the streets of the UK, or anywhere else in our world," the statement read.

May said the strikes were specifically aimed at destroying Syria's chemical weapons capabilities, and that the three-way coalition did not intend to intervene in the Syrian civil war or force regime change.

Last week's attack on Douma had "crossed a red line for France," Macron added. "We cannot tolerate the trivialization of the use of chemical weapons which presents an immediate danger to the Syrian people and to our collective security."

All three Western allies had said this week that they had evidence Bashar al-Assad's government was responsible for last Saturday's attack and that the regime would have to pay a price for using chemical weapons.

The Syrian regime and Russia have denied any use of banned weapons.

US Defense Secretary Jim Mattis told a Pentagon press briefing that Friday night's targets were hit harder than last year's single hit on a Syrian airfield, which is estimated to have wiped out around 20 percent of the Assad regime's air power. He added that the time had come for "civilized nations" to unite to end the Syrian war.

Mattis said forces used around the double amount the missiles in the latest attack, compared to last year. In all, three main Syrian military sites were targeted — a research facility in Damascus connected to the production of weapons, a chemical weapons storage facility in Homs, and a weapons storage and command post near Homs.

Unlike the president, US military officials said the current wave of strikes were over after just 70 minutes and that any future strikes would depend on whether the Assad regime conducts any future chemical attacks. "Right now this is a one-time shot," Mattis said.

US Joints Chief of Staff Chairman Joseph Dunford said he had not been aware of any response from the Assad regime in terms Syrian air defense.

Russia's Defense Ministry said that none of the strikes in Syria had hit areas near its naval and air bases, though news agencies reported that the Syrian government had responded to the air attack with surface-to-air-missiles. Syrian state television reported that the regime's air defense managed to shoot down around 13 missiles over Damascus..

"What kind of a nation wants to be associated with a mass murderer of innocent men, women and children?" the president said, adding that "nations of the world can be judged by the friends they keep."

Trump also accused Russian President Vladimir Putin of failing to keep his promise to see that the Syrian regime destroyed its stockpile of chemical weapons.

Ahead of the western allies' strikes on Syria, several officials raised concerns over the prospect of a broader conflict in the region between the world's powers. However, Dunford said that the Russian military had been told in advance of the incoming airstrikes, but not where the targets were. The targeted sites were also chosen to limit the loss of life and avoid hitting Russian forces altogether, Dunford added.

Why Syria is not the Cuban missile crisis of 2018

The 1962 Cuban missile crisis brought the world as close as it has ever been to a global nuclear war. Is the Syrian dispute between the US and Russia in any way comparable to the most dangerous episode of the Cold War? (13.04.2018)