More than 30 people, including children, were killed when an arms depot exploded in a residential building, according to a war monitor. Civil defense volunteers said they were still trying to pull people from the rubble. 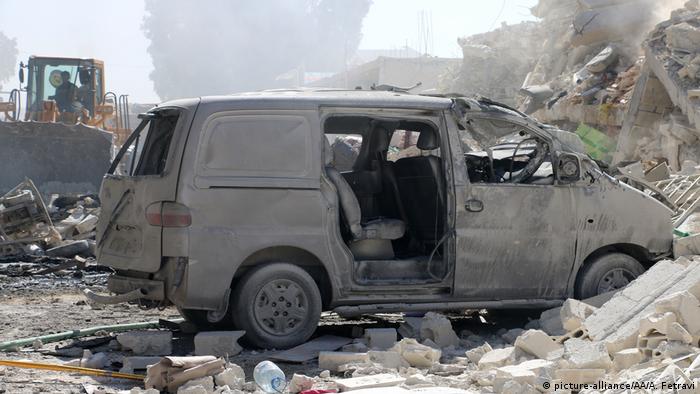 At least 39 people were killed on Sunday, including children, by an explosion at a weapons depot in the Idlib village of Sarmada, said the UK-based Syrian Observatory for Human Rights.

The Syrian Civil Defense, first responders better known as the White Helmets, put the death toll at 36 people, but noted that it could be higher since rescue operations were ongoing.

The depot had been housed in a residential building, said the independent war monitor, which uses a vast network of on-the-ground sources. The explosion caused two five-story buildings to collapse, according to local activists.

"Rescue and firefighting teams are still working to pull out other victims from under the rubble," a civil defense volunteer told DPA news agency.

Sarmada is located in the Idlib province, considered the final front for Syrian rebels. Regime forces have called on citizens in the area to leave before they begin their campaign against rebels. Many of Idlib's rebels are part of hard-line militant groups, with some linked to al-Qaeda.

But Turkey appeared to warn Syria on Sunday. President Recep Tayyip Erdogan said his country had taken military and diplomatic measures to avoid a "catastrophe" in the province. Turkey has backed anti-government rebels and maintains a military presence in Idlib.

More than 300,000 people have been killed since the conflict began in 2011, when government forces launched a brutal crackdown on peaceful protesters calling for the release of political prisoners and President Bashar Al-Assad to step down.

Since then, the conflict has transformed into a multi-fronted war involving global powers, neighboring countries and non-state actors, including the US, Russia and Iran.

A Syrian government offensive against the al-Qaida stronghold of Idlib and Turkish attacks on Kurdish forces in Afrin are creating a humanitarian crisis and massive displacement. The UN is calling for a ceasefire. (01.02.2018)