Hundreds of members of the Syrian Civil Defense aid organization have been evacuated from Syria. Its director told DW that the aid workers are in grave danger due to regime attacks. 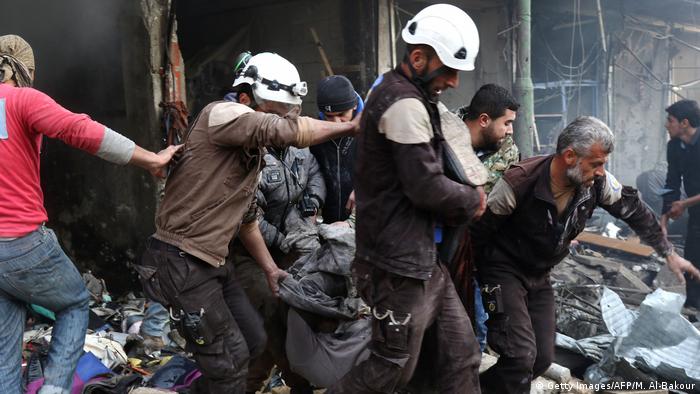 Members of the White Helmets participating in a rescue operation in Idlib, Syria after an airstrike

On Sunday, 422 members of the Syrian Civil Defense, also known as the White Helmets, arrived in Jordan from southern Syria with the help of Israel. They had fled from the government of Syrian President Bashar al-Assad, which has been conducting a major offensive to take back land from rebel groups as part of the civil war that has raged since 2011. The members who arrived in Jordan will eventually be resettled as refugees in countries such Canada and Germany within the next three months.

In an interview with DW Monday, the White Helmets director Raed al-Saleh said the evacuations of his organization's members to Jordan have been "unfortunately discontinued" and that the members of the organization still in Syria were in clear danger due to gunfire and bombings in the country's south. Originally 800 members were supposed to reach Jordan, he said, but the Syrian army and its militias prevented them from leaving, resulting in only about half making the journey. He said that there are currently 3,700 members of the Syrian Civil Defense still inside Syria.

The White Helmets conduct search and rescue missions across Syria to save civilians. For example, when a building is hit by an airstrike, members of the organization seek to rescue those caught beneath the rubble. Assad has accused the group of being members of al-Qaeda and of being western propaganda used to delegitimize his government.

Read more: Who are the Syrian White Helmets?

The Syrian government has also criticized the White Helmets for receiving help from Israel to flee Syria. Khaled al-Khatib, the organization's media coordinator, told DW on Monday that "these accusations are an attempt by the Syrian government to question our work and undermine our credibility." He said that his organization has "no relationship with Israel."

He also responded to the Assad government's allegations that the White Helmets are aligned with rebel groups and terrorists. "We don't belong to any party in the conflict. We document war crimes that are being committed in Syria," he said, stressing that the organization's "utmost priority" is to save lives from air raids and that the Syrian regime is responsible for most aerial bombardments in the country.

In Germany, politicians were divided on whether to take in the White Helmets who had been evacuated. The German government issued a statement Monday in which it pledged to accept some of the civil defense forces.

"I have decided that Germany will take in eight members of the 'White Helmets' aid group and their families and grant them protection," read the statement by German Interior Minister Horst Seehofer, who has on the whole expressed a vehemently anti-immigrant stance. "The continuing military offensive and the territorial gain the Syrian regime is making in southern Syria presents an acute danger for the White Helmets and their families."

"The work of the White Helmets deserves admiration and respect and we have supported it out of our conviction," Foreign Minister Heiko Maas also said. "From the beginning of the conflict they have saved over 100,000 people." Maas explained that the Syrian government's offensive in southern Syria would pose a danger to any remaining White Helmets there and it is an "act of humanity" to allow some of them to receive protection in Germany.

The German Left Party had an entirely different approach to the situation. The party suggested that Germany instead grant asylum to Wikileaks founder Julian Assange, who could be forced to leave the Ecuadorian Embassy in London, where he has been living since Ecuador granted him asylum in 2012.  The Left Party said it would be better to take in Assange than members of the White Helmets, which it said has ties with "Islamic terrorists," without providing evidence to back up its claim.

"It is completely contradictory that Interior Minister Horst Seehofer on the one hand wants to fight Islamist terror, but on the other hand wants to bring in these members of Islamist terrorist militias to Germany,"  Heike Hänsel, the deputy chairman of the Left Party said.

DW correspondent Anchal Vohra on the evacuation of Syrian White Helmets by Israel.