The Israeli military says it has rescued hundreds of members of a Syrian volunteer organization from a volatile border area in Syria's southwest. It's the first such intervention by Israel in Syria's civil war.

DW correspondent Anchal Vohra on the evacuation of Syrian White Helmets by Israel.

Israel evacuated hundreds of members of the White Helmets and their families from southwestern Syria to Jordan overnight, army radio said Sunday.

The Israeli military said the evacuation was an "exceptional humanitarian gesture" carried out at the request of the United States and a number of European countries due to "an immediate threat to (the Syrians') lives."

Read more: Who are the Syrian White Helmets? 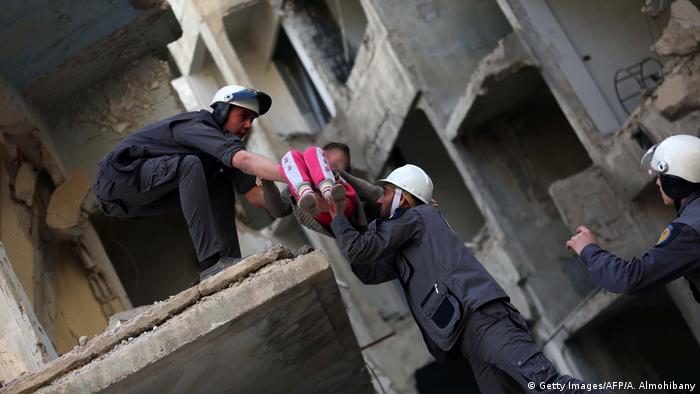 Canadian Foreign Minister Chrystia Freeland said her country was working with Britain and Germany "to ensure the safety of White Helmets and their families."

"We feel a deep moral responsibility towards these brave and selfless people," she said in a statement.

Hundreds of thousands of Syrians have fled their homes since Russian-backed government troops launched a major offensive to capture rebel-held territory in the country's south in mid-June.

The request to evacuate the White Helmets came as Syrian troops closed in on Quneitra province, which borders Israeli-occupied Golan Heights, Jordan and Lebanon. US officials said the volunteers at the border were likely to be targeted by the government advance.

The rescue marked the first time in the eight-year war that Israel has allowed Syrians to flee through its territory. The military said that did not mean Israel's policy of non-intervention in the conflict had changed.

"Israel continues to maintain a non-intervention policy regarding the Syrian conflict and continues to hold the Syrian regime accountable for all activities in Syrian territory," the army said.

The White Helmets volunteer group, officially known as the Syrian Civil Defense, has been running a rescue service in mainly opposition-held parts of Syria since 2013. They are credited with saving thousands of civilian lives during government airstrikes.

Human Rights Watch says there are at least nine mass graves in the Syrian city of Raqqa. It's thought that thousands of people were killed there during the battle to retake the city back in 2017. Filip Warwick reports. (22.07.2018)