Who are the Syrian White Helmets?

The Syrian Civil Defense, also known as the Syrian White Helmets, have been awarded the 'Alternative Nobel Prize' this evening in Stockholm. What role does their humanitarian work play in the Syrian conflict?

The White Helmets were chosen to receive the prize this past September, along with Russian activist Svetlana Gannushkina, Egyptian feminist activist Mozn Hassan and Turkish newspaper Cumhuriyet.  It's also known as the Right Livelihood award.

The Right Livelihood Award foundation described the the White Helmets as a "lifeline and a rare source of hope for the besieged civilian population” in Syria and "outspoken in calling for an end to hostilities.”

Syria's civil war between the Assad government and the rebel opposition since 2011 has seen numerous bombings, airstrikes and sieges - inflicting enormous harm on the civilian population. The White Helmets, made up of volunteers, seek to mitigate the damage, and claim to have saved at least 73,000 lives.

Caught in the crossfire

The White Helmets operate in the rebel held areas of Syria, such as East Aleppo and Idlib. When an airstrike, or a crudely made "barrel bomb” hits an area, the White Helmets respond and try to save anyone crushed by the rubble.

In the beginning, it was the Syrian government dropping these barrel bombs, but now the Russian Air Force has also been launching airstrikes on Syrian territory since late September 2015. Densely populated urban areas such as East Aleppo have experienced many of these aerial assaults. Some 250,000 people there are trapped and under siege.

The White Helmets themselves are often killed during airstrikes. According to the organization, more than 141 volunteers have been killed. The organization demands that the Syrian government end its use of barrel bombs – these metal containers filled with explosives, oil and other materials are notoriously inaccurate in their execution. They hit civilians rather than rebel groups.

UN Security Council resolution 2139, which had been passed in February 2014 unanimously, called for an end to the barrel bombs.  The Syrian regime uses "double-tap” bombing, where an area is bombed and then the same area is bombed again moments later, killing first responders such as the White Helmets.

The Syrian Civil Defense was started in 2013, byBritish security consultant James Le Mesurier. Le Mesurier  is also a former British Navy officer and was involved in the Syrian Civil Defense program at a United Arab Emirates managed consultancy agency in Syria. In March 2013, training for volunteers were initiated in northern Aleppo. In October, 2014, they had a meeting of various volunteers from around Syria to establish the independent organization. 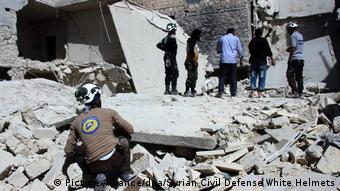 White Helmets inspect the rubble after an airstrike in Aleppo

Today they claim to have 2,267 volunteers or "civil defenders” and 120 volunteer centers in Syria. They have many sources of funding, most notably the UK Foreign and Commonwealth Office, the United States Agency for International Development (USAID) and the German government, among others. As of last year, they had an annual budget of 30 million dollars. The current director is Raed al-Saleh.

The White Helmets claim to be a neutral, objective group in the conflict. The President of Syria, Bashar al-Assad, believes they are propaganda used against him, another way that Western countries can blame his government. He sees them as part of the rebels, which he describes as "terrorists.”

Russian state-owned media outlet Sputnik has also questioned the White Helmets and claims it makes up reports of casualities.

The United Nations special envoy to Syria has said the besieged eastern part of Aleppo could be destroyed a a month's time. About 225,000 people are thought to be living there under threat of starvation. (25.11.2016)

UN humanitarian official Jens Egeland says he hopes an aid operation to east Aleppo can take place soon. He said the alternative seemed to be that people there would starve. (24.11.2016)

A look at the recipients of the 'Alternative Nobel Prize'

Four people and organizations have been chosen for what is widely known as the "Alternative Nobel Prize." The four have addressed free speech, war, women's rights and migrants. (22.09.2016)