The United Nations special envoy to Syria has said the besieged eastern part of Aleppo could be destroyed a a month's time. About 225,000 people are thought to be living there under threat of starvation. 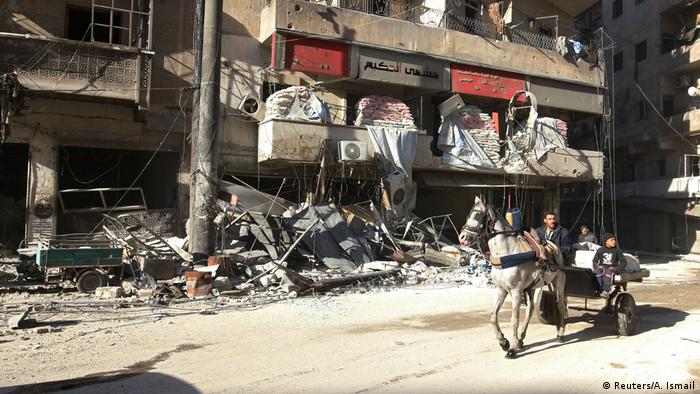 Following a visit to Damascus, UN special envoy Staffan de Mistura was "very worried" about the future of east Aleppo. In an interview published in Friday's "Süddeutsche Zeitung" newspaper - following an interview he gave to DW earlier this week - de Mistura repeated that if the bombing continued as it had up until now that "by Christmas, there would be no east Aleppo anymore."

He had the impression that the government was seeking to accelerate its military activity in the embattled city, control of which is split between the regime and various rebel forces.

He said it was possible that Assad's forces would succeed in taking over the eastern rebel-occupied part of the city when it was almost destroyed. In such a case, he said tens of thousands of refugees would make their way to Turkey.

The head of the Syrian "White Helmets" urban rescue volunteer group told Reuters news agency on Thursday that besieged residents of Aleppo were about 10 days from starvation.

De Mistura said he feared that if no lasting political solution was found, coming years would see guerilla warfare in rural areas and car bombs in the cities. He also said no one, including Russia, wanted such situation. Along with Iran, Russia is among the biggest supporters of Syrian President Bashar al-Assad.

"That's why we believe that there must be a compromise for east Aleppo," de Mistura said.

He also said that lasting victory against the terror groups "Islamic State" and the Nusra Front would only be possible if there was an "inclusive political solution" in Syria.

"We saw that in Iraq. If there's no inclusive political approach, such groups will spring up again like mushrooms, fuelled by the disenfranchisement of the Sunnis and their feeling of being excluded," de Mistura said.

De Mistura also said he believed Russia would not want to be held responsible for the destruction in eastern Aleppo and again called on Moscow to assert its influence on Damascus.

He said his recent meetings in the Syrian capital showed the regime had been emboldened by comments from US President-elect Donald Trump during the election campaign about stopping support for Syrian rebels. However, he reminded Syrian leaders that any US president would face massive public pressure and indignation if the situation ended in a humanitarian tragedy.

"President Obama .... and Secretary of State John Kerry are very motivated to end the greatest humanitarian tragedy of this century that has played out during their time in office. It's about their legacy," de Mistura said.

As the war in Syria drags on, the humanitarian situation in Aleppo has grown steadily worse. The international aid organization Doctors Without Borders (MSF) has warned of a major crisis. (30.07.2016)

UN Syria envoy: Time is running out in Aleppo