The Syrian regime has gained ground in southwestern Quneitra province after rebels were evacuated from the area under a deal. This comes as the first delivery of aid provided by France and Russia arrived in the country. 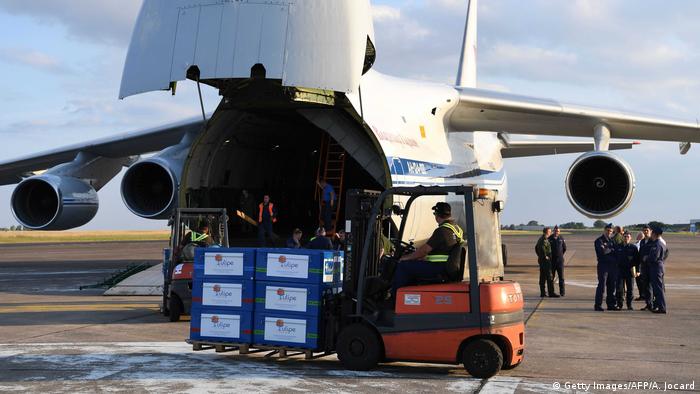 The Syrian army pushed into the edges of former rebel-held Quneitra province on Saturday, as aid provided by France and Russia arrived in the country in the first joint humanitarian aid operation between Russia and a Western country.

The delivery came as Russian President Vladimir Putin and French leader Emmanuel Macron on Saturday discussed "humanitarian aspects of the Syria settlement," including the joint mission "to render assistance to the population of Eastern Ghouta," the Kremlin said.

The operation was agreed upon by Putin and Macron during talks in Saint Petersburg in May.

Read more: The rise of the 'Islamic State'

A Russian Antonov-124 Ruslan military cargo plane delivered more than 40 metric tons of medical aid and humanitarian supplies to the Russian military base in Hmeimim after departing from the central French city of Chateauroux early Saturday, the Russian Defense Ministry said.

The aid includes medicine, medical equipment, clothes and tents, and is to be given to residents of eastern Ghouta on the edge of the capital, Damascus. Eastern Ghouta was retaken by government forces in April after a five-year siege.

It will be distributed under the supervision of the UN's Office for the Coordination of Humanitarian Aid (OCHA).

Syrian forces meanwhile have been able to close in on the southwestern area of rebel-held Quneitra province following a deal negotiated between Russian forces and the rebels last week that saw hundreds of rebels and their families evacuated from the area.

The army and its allies made advances that have brought it closer to the Israeli-occupied Golan Heights, state television and the rebels said.

The offensive has allowed the Syrian government to restore control over a section of the strategic territory, which borders Jordan and Israel.

The evacuations from Quneitra province came after a Russia-brokered agreement was reached earlier this week to see rebels hand over the territory to the Syrian regime.

The deal reached between Russian officers and the insurgents provided safe passage to rebels rather than a return to state rule, while offering others who decide to stay guarantees against army advances in their own localities, rebels said.

Some 50 buses transporting rebels and their families on Saturday reached the Morek transit route in the north of Hama province, which connects regime and rebel-held territories, an AFP correspondent at the scene said.

They were then to be transferred to other buses run by local NGOs, before continuing north to temporary camps in rebel-held areas in Idlib and Aleppo provinces, SOHR said.

"More than half of the evacuees are women and children," said SOHR head Rami Abdel Rahman. "A second wave of departures is expected from Quneitra," he added.

Regime forces close in on Daraa

The Russian deal with the rebels also allows the return of Syrian army brigades that existed before the 2011 conflict back to where they were stationed near a 1974 demilitarized zone with Israel on the Golan frontier.

President Bashar Assad's troops launched their southern offensive on June 19, targeting the province of Daraa before turning their attention to neighboring Quneitra. The regime has now captured more than 90 percent of Daraa.

On Friday, 11 children were among 26 civilians killed in airstrikes that hit several towns in the area, the SOHR said.

The Syrian conflict has killed more than 350,000 people and displaced millions since it started in 2011 with a brutal government crackdown on protesters.

As regime forces take over the birthplace of the country's revolution, experts have described it as the "end of the Syrian revolution." What was once known as the "moderate opposition" has all but disappeared in Syria. (13.07.2018)