Humanitarian agencies at the Jordanian border confirmed that tens of thousands of civilians were returning home. The Syrian army offensive on Daraa province had left 320,000 people displaced. 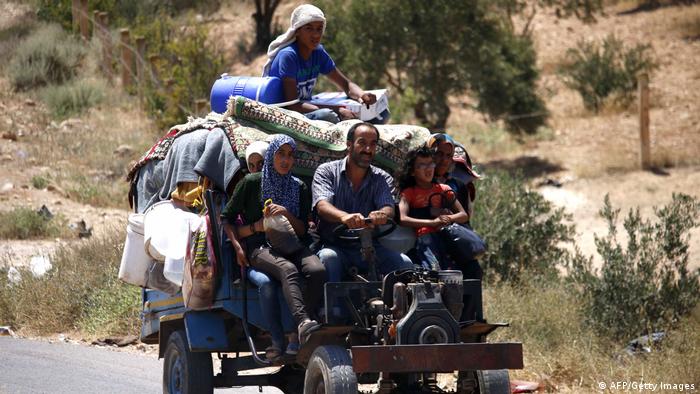 Syrians from the southern Daraa province have begun their journey home, as a result of a deal between Russia and Syrian rebels that sought an end to more than two weeks of deadly bombardments in the area.

A Syrian regime bombardment campaign on Daraa had displaced more than 320,000, according to the United Nations. Many sought refuge on the Syrian side of the Jordanian border.

More than 60,000 people have departed the Jordanian border and heading back to their homes in the east or west of Daraa province, the Britain-based Syrian Observatory for Human Rights said.

The UN humanitarian coordinator in Jordan, Anders Pederson, confirmed on Sunday that most of the displaced along the Jordanian border had headed back inside Syria.

But International relief agency CARE told The Associated Press that many Syrians were still refusing to return home out of fear of being detained or conscripted into the army.

Jordan's border remains closed to Syrian refugees. The country says it has already taken in about 1.3 million Syrians. About half that number are registered with the UN.

Under Daraa's ceasefire deal, Syrian government forces were to deploy along the Jordanian border, while rebels were to hand over their heavy weapons and given the option of being bused out to rebel-held areas in northern Syria.

The deal between rebels and Russia in Daraa is the latest in a string of such agreements that have allowed Damascus to regain control of rebel-held areas.

The ceasefires often follow blistering military offensives or crippling sieges, which are the mechanism to force the rebels into so-called "reconciliation" deals.

Syria's war has killed 350,000 people and displaced millions of others since it began with the brutal repression of anti-Assad protests in 2011.

Jordan's government has closed its border to refugees fleeing the war in southern Syria, instead launching a national aid drive to help those trapped. The policy has drawn harsh criticism on social media. (03.07.2018)