The story of Western intervention in the seven-year Syrian civil war is one of missed opportunities. In responding to such conflicts, the West must learn from its past mistakes, says DW's Kersten Knipp. 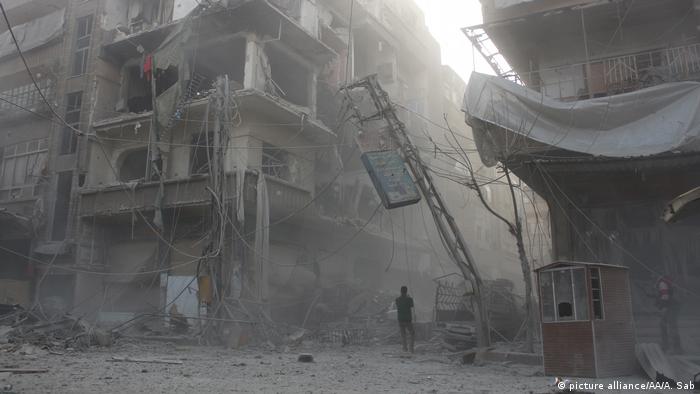 The war in Syria poses plenty of "What if...?" questions. There is one that is particularly relevant to Western countries, and how they have responded to the conflict. How would this war have turned out if the West had intervened in a different way?

From today's perspective, the story of Western involvement in the Syrian civil war is, above all, one of missed opportunities. The best-known of these was in 2013, when it became apparent that the regime of President Bashar al-Assad could deploy chemical weapons against Syria's civilian population. Then-US President Barack Obama warned of the "red line" that would be crossed if this were to happen, vowing that there would be consequences. But chemical weapons were actually used, and Obama did nothing. He ignored the poison gas, or his previous warning, or perhaps both.

This, it seems, may have been the last chance to set some limits for the Assad regime. Back then it was not yet under the protection of Iran and Russia, at least not as much as it is now. There was still, to some extent at least, a balance of power that would have made any intervention by the US and its partners seem conceivable. Obama let this opportunity pass.

He may have good reasons for this. The US intervention in Iraq had taken place a decade previously, and had long since turned out to be a political, moral and propagandistic disaster. The headless invasion, prepared on the basis of deliberate lies, made the US appear like an arrogant, neoimperialist power — an image problem from which it still has not recovered.

For this reason alone, another intervention in the Middle East 10 years later — this time in Syria — would have been risky. Depending on how it turned out, it had the potential to further destroy the US' reputation.

However, it was equally difficult to weigh up the strategic risk. Ultimately, it was completely unforeseeable how such an intervention would end. Would it have been possible to influence Assad? Would Russia and Iran have put up with an invasion? And would Obama possibly have caused parts of the Islamic world to become even more enraged against his country — Shiites, but perhaps also Sunnis? Would an intervention have meant new terrorist attacks in the US and Europe?

The price of passivity

It goes without saying that an invasion could have had disastrous consequences. But the same dilemma applies to the decision not to intervene. The current situation is well known: Russia and Iran have taken the reins in Syria and intervened to such an extent that it is no longer possible for the West to consider any kind of confrontation. Demands by Washington and European leaders for Assad to surrender have degenerated into mere lip service. What the West wants, or doesn't want, is inconsequential. The usual gestures of concern no longer impress anyone on the ground in Syria.

What's more, the fact that in the years prior to the start of the Syrian civil war, the US had apparently toyed with the idea of trying to overthrow Assad — which may have also plunged Syria into chaos — makes the country appear to be a power with thoroughly dubious intentions.

The early stages of the conflict were not improved by Obama and his partners substituting rough interventionism with indecisive half-heartedness. Yes to supporting the rebels — but not too much, for fear of supporting the wrong ones (in other words, jihadis). Rather than help to bring an end to the fighting, that approach encouraged countless opposition members to wage a war that, from today's perspective, was lost before it even began. And it was not only these fighters who were killed. Hundreds of thousands of civilians have also been the victims of terrible violence, carried out with a kind of cynicism that has been rarely matched in recent wars, even against the horrific backdrop of the 20th century.

The question is, what can we learn from all this? Western interventions conducted in amateur fashion have ended as bloody failures, as Iraq and Libya show. It has become clear that the West is not currently in a position to undertake any long-term, constructive military action.

But the West cannot just consign such efforts to others: Russia and Iran have influenced the war in Syria to an extent that is hardly surpassable in terms of cynicism. For the future — albeit no longer for Syria, for which it is too late — this means that behind any stern warnings must be resolute and well-thought out actions, or the West should stay out of matters altogether. At the same time, lip service achieves nothing. It just makes things worse.