US threatens retaliation against chemical weapons attacks in Syria

US Ambassador Nikki Haley has said the US remains "prepared to act" to end chemical attacks and "inhuman suffering" in Syria. She also circulated a draft UN ceasefire resolution to replace an earlier "failed" truce. 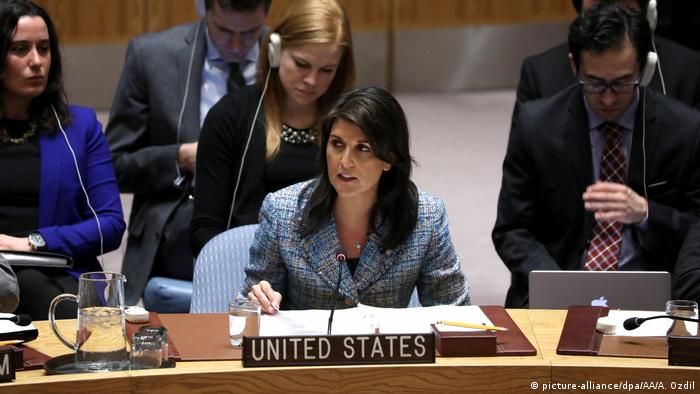 The US warned at the UN on Monday that it would react to any chemical weapon attacks in Syria as it proposed a new 30-day-ceasefire in the rebel-held enclave of eastern Ghouta .

"We also warn any nation that is determined to impose its will through chemical attacks and inhuman suffering, most especially the outlaw Syrian regime: The United States remains prepared to act if we must," Ambassador Nikki Haley told the UN Security Council.

She reminded the council that President Donald Trump had ordered missile strikes against a Syrian government airbase in April 2017 after accusing forces loyal to Syrian President Bashar al-Assad of using sarin gas against civilians.

Haley also outlined a new draft ceasefire after saying an older one approved by the UN on February 24 had "failed."

"This is no ceasefire," she said, adding: "This is the Assad regime, Iran, and Russia continuing to wage war against their political opponents." Russia, she said, had conducted at least 20 daily bombing missions in Damascus and eastern Ghouta in the first four days of the truce.

The US draft would see an immediate end to all hostilities in eastern Ghouta and the nearby city of Damascus for 30 days after its adoption to allow humanitarian aid to reach civilians, according to AFP news agency.

Death and destruction in eastern Ghouta

With Russian support, Assad forces have retaken nearly 60 percent of eastern Ghouta. More than 1,100 civilians, including 241 children, have died in the fighting, according to the Syrian Observatory for Human Rights.

Russian Ambassador Vassily Nebenzia, who said the Russian-backed operation in eastern Ghouta was part of a counterterrorism mission, criticized the US for "doing nothing but constantly blaming the Syrian regime and putting demands on Russia."

Nebenzia said the earlier ceasefire was not designed to stop fighting immediately, but was instead a "preliminary agreement" for "sustained de-escalation in all difficult areas of Syria, not only eastern Ghouta."

French Ambassador Francois Delattre said Russia could "stop the bloodbath" if it stopped its bombing campaign and convinced Assad to stop his offensive.

"We all know that Russia has not been able or willing to stop this military offensive yet," he said.

UN Secretary General Antonio Guterres said suffering in eastern Ghouta was becoming "more desperate by the day." According to him, not a single critically injured person had been evacuated since the February 24 ceasefire entered force.

Thousands of people have been fleeing the Syrian town of Afrin, as Turkish troops and opposition fighters move closer to completely encircling it. Troops have destroyed water and power stations that supply the town. (13.03.2018)