The Syrian army has now captured over two-thirds of eastern Ghouta. Some 12,500 people have fled from the town of Hammuriyeh, hours after it was captured by government forces. 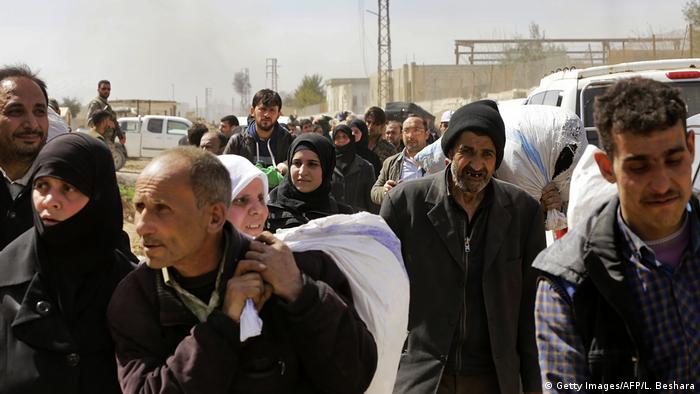 Thousands of Syrians fled the eastern Ghouta suburb of Damascus on Thursday, as the army captured more key opposition-held pockets.

Syrian state television showed thousands of civilians carrying plastic bags filled with clothes as they fled Hammuriyeh and Jisreen, hours after the two towns were captured by government forces.

With some 12,500 people evacuated the town into government-held territory, Thursday's exodus marks the largest outflow of civilians from Eastern Ghouta since it came under government siege in 2013.

How far have government forces advanced into eastern Ghouta?

According to the Syrian Observatory for Human Rights, a Britain-based monitoring group, Syrian President Bashar Assad's forces now control over 70 percent of the eastern Ghouta enclave. After stepping up its onslaught on the region around month ago, Syrian troops have:

At least '800 people fleeing every hour'

Abdel-Rahman, the head of the Syrian Observatory said that Thursday marked the "largest exodus from the region since it fell under government siege."

Russian military general Vladimir Zolotukhin was quoted as saying that "every hour, over 800 people are leaving."

On the ground, a Syrian officer in government-held territory said he welcomed the fleeing civilians from eastern Ghouta. "Praise God...the families are coming out to suitable locations to the state's embrace," he said.

The rush to deliver aid: Despite Thursday's exodus, some 400,000 people remain trapped in eastern Ghouta, as aid agencies scramble to deliver food and medicine to besieged areas.

On Thursday, a 25-truck convoy entered the isolated town of Douma with food supplies for some 26,000 hunger-stricken residents.  "This is just a little of what these families need," said the International Committee of the Red Cross, one of the bodies organizing aid deliveries to the region.

Earlier this week, sick residents from Douma were allowed to evacuate to Damascus to receive medical treatment.

'Hell on Earth': The United Nations has made repeated demands for the Syrian government to halt its brutal advance into eastern Ghouta, describing the region as "hell of Earth."

However, those demands have fallen on deaf ears, as Assad appears committed to rooting out all rebel forces from the region, which sits just to the east of Damascus.