The United Nations has warned that the perpetrators of war crimes in Syria will be held accountable. The UN's rights body is compiling dossiers to prosecute those responsible for attacks on Syrian civilians. 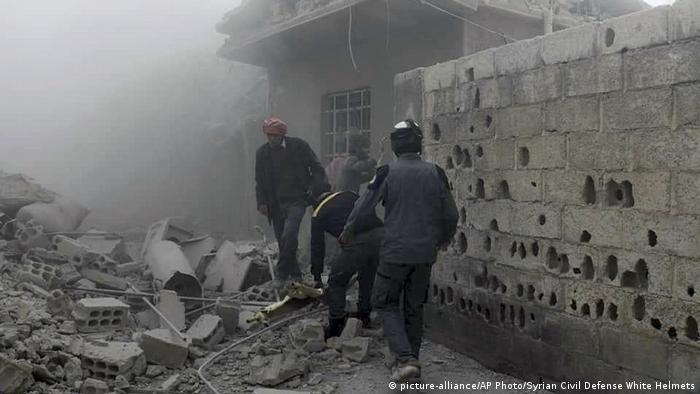 The UN High Commissioner for Human Rights Zeid Ra'ad al-Hussein warned Syria that potential war crimes were being committed in eastern Ghouta, speaking at an emergency session of the UN Human Rights Council in Geneva on Friday.

"What we are seeing in eastern Ghouta and elsewhere in Syria are likely war crimes and potentially crimes against humanity," he said. "Syria must be referred to the International Criminal Court. Attempts to thwart justice and shield these criminals are disgraceful."

He warned that those responsible for the attacks were being identified and that the UN was compiling dossiers on their activities for future prosecution, noting: "The wheels of justice may be slow, but they do grind."

Syrian government forces, with the backing of Russia, have been conducting airstrikes on the rebel-held Damascus suburb of eastern Ghouta for the past 12 days. Those attacks have killed hundreds of civilians in the city of 400,000. Eastern Ghouta is the last rebel-held enclave near the Syrian capital.

Speaking in Geneva, Syrian Ambassador to the United Nations Hussam Aala accused Zeid of being "selective and biased" in his comments, adding that the entire debate was "politicized." He claimed that the Syrian army was doing everything possible to protect civilians and had opened "humanitarian corridors for the passage of civilians to separate them from the terrorists."

On February 24, the United Nations Security Council voted unanimously in support of a 30-day ceasefire across Syria, nevertheless, airstrikes have continued to pound the city. Two days after the Security Council resolution was passed, Russia announced that it would enact daily, five-hour "humanitarian pauses."

Speaking with DW TV, special advisor to the UN special envoy for Syria, Jan Egeland, said, "We need longer pauses." He added that the five-hour pauses also had to be respected by rebels within the city.

Criticizing the fact that Russian-backed government forces were simply conducting airstrikes in areas outside Eastern Ghouta for short periods and then resuming them within as soon as the five hours had passed, Egeland said that if the pauses were not lengthened, "we cannot deliver aid in, we cannot take medical evacuations out and we cannot really ensure that civilians are safe if they want to leave the area."

NRC's Egeland talks about the situation in Syria

Humanitarian organizations have been unable to provide medical treatment and food to Eastern Ghouta's 400,000 residents, many of whom have been trapped in basements across the bombed-out city fearing for their lives. Food is extremely scarce and malnutrition a major problem. Those residents who grow their own food in the area have also been unable to reach their plots due to the heavy daily bombardments.

And the death toll rises by the hour

Syria's civil war, which has been raging since 2011, has become increasing entangled with a number of parties involved on many sides. More than 340,000 people have been killed and millions have been displaced since hostilities began and there are no indications that the fighting will stop any time soon.