Washington and Moscow criticize each other for the failure of a truce near Syria's capital, Damascus. Residents remain trapped in the rebel-held enclave of eastern Ghouta, while humanitarian convoys remain on standby. 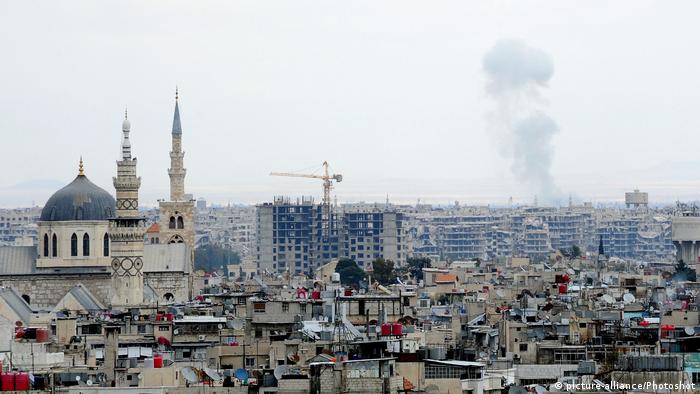 Russia's unilateral declaration this week to begin five-hour pauses in the fighting in Syria's eastern Ghouta has been labeled "cynical, callous, and in flagrant defiance of demands" for at least a 30-day ceasefire.

The US ambassador for economic and social affairs at the United Nations, Kelley Currie, told a UN Security Council meeting on Wednesday that "Russia, Iran and the Assad regime are not even trying to hide their intentions," to urge civilians to leave the area on a false premise so that they can attack anyone left in the last rebel-controlled area near the capital, Damascus.

Currie blamed the Syrian regime for violating the ceasefire, after government forces on Wednesday launched a ground assault on the edge of the enclave. Russian ambassador Vassily Nebenzia meanwhile accused Syrian rebels of failing to ensure a temporary halt in the violence.

Defending Moscow's use of short pauses rather than a 30-day ceasefire adopted by the Security Council on Saturday, Nebenzia said the criticism amounted to a failure to understand realities on the ground or a deliberate exploitation of human tragedy." He said Russia was doing "everything possible" to implement the truce.

Both Moscow and Damascus say they are battling terrorist groups operating in and around the enclave that are excluded from the truce.

Despite Russia beginning the first of several five-hour pauses on Tuesday, aid agencies were unable to deliver humanitarian aid and evacuate the critically ill and wounded, while civilians shunned Russia's offer of a safe passage out of the enclave.

Not one of the battered region's 400,000 residents left to board buses provided by the regime on Wednesday, with many armed groups inside the territory insisting that any evacuations be conducted under UN supervision.

UN humanitarian chief Mark Lowcock told the Security Council that the 30-day ceasefire deal agreed at the weekend must go into force to allow aid to enter. Trucks loaded with supplies have been poised to go to 10 locations, but there has been no access for humanitarian convoys, nor authorization by the regime to go into the besieged areas, he said.

Lowcock warned that if the truce was not implemented soon, "we will soon see even more people dying from starvation and disease than from the bombing and the shelling."

Since February 18, more than 550 civilians, including 136 children, have been killed in the enclave, according to estimates by the Britain-based Syrian Observatory for Human Rights.

The onslaught has been one of the fiercest of Syria's civil war, now entering its eighth year.

Moscow's humanitarian pause echoes a similar tactic employed by Russia and the Syrian regime as they looked to force rebels out of Syria's second-largest city, Aleppo, during a ferocious 2016 battle.

The hiatus is envisaged to run daily for five hours beginning at 9 a.m. local time (0700 UTC). The first day of the truce on Tuesday quickly collapsed when bombing and shelling resumed after a short lull, while Wednesday's cessation of violence was sandwiched by air raids which killed three people, the Observatory said.