A humanitarian ceasefire in eastern Ghouta has broken down nearly as soon as it started. The UN is urging warring parties to allow aid into devastated areas. 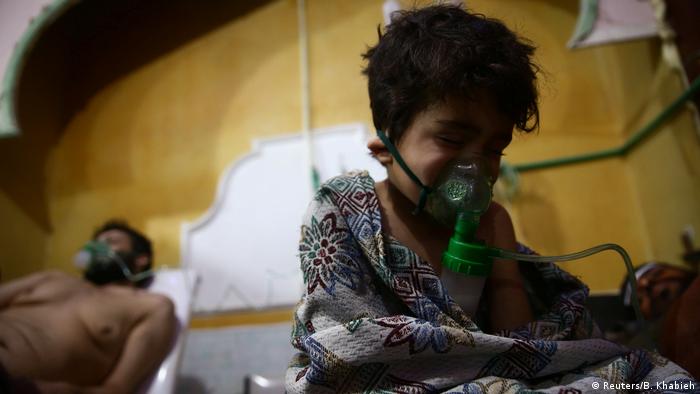 Syrian regime warplanes and artillery bombed eastern Ghouta on Tuesday, despite a Russian-brokered ceasefire in the rebel-held enclave.

Damascus and Moscow said rebels shelled an evacuation route opened to allow civilians to leave eastern Ghouta. The UN said the fighting made it impossible to remove civilians or provide aid.

"We have reports this morning there is continuous fighting in eastern Ghouta," U.N. humanitarian spokesman Jens Laerke said. "Clearly the situation on the ground is not such that convoys can go in or medical evacuations can go out."

The renewed fighting comes amid calls from the international community to implement a nationwide cessation of hostilities as the humanitarian situation worsens on the ground.

What the ceasefire entails:

Massive casualties: Over the past week, more than 500 civilians have been killed by the Syrian government's latest offensive in eastern Ghouta. Russian warplanes formed an integral part of the offensive, according to independent monitors, rights groups and US authorities.

Why now: As the conflict winds down, Damascus is attempting to consolidate territory across the country with the help of Russia to secure its interests during peace talks.

Given that eastern Ghouta is one of the last remaining rebel strongholds, the Syrian regime is seeking to strike a fatal blow to the opposition movement before peace talks gain ground.

Calls for ceasefire: With a growing civilian death toll, the international community has urged all warring parties to enact a nationwide ceasefire. On Saturday, the UN Security Council voted unanimously in favor of a 30-day humanitarian ceasefire.

Better than nothing: Stephane Dujarric, spokesman for UN chief Antonio Guterres, responded to the announcement, saying: "Five hours is better than no hours, but we would like to see any cessation of hostilities be extended."

Russia "can end" the violence: US State Department spokeswoman Heather Nauert urged Russia to use its "influence" to end the fighting. "The United States calls for an immediate end to offensive operations and urgent access for humanitarian workers to treat the wounded and deliver badly needed humanitarian aid," Nauert tweeted late Monday. "Russia has the influence to stop these operations if it chooses to live up to its obligations under the #UNSC ceasefire."

Seven-year war: More than 300,000 people have been killed since the conflict began in 2011 following a government crackdown on protesters calling for the release of political prisoners and for President Bashar Assad to step down. Since then, the conflict has evolved into a multifaceted war, drawing in global superpowers, neighboring countries and non-state actors.