At least 30 civilians, including children, have been killed in shelling attacks and airstrikes in the rebel stronghold of Eastern Ghouta. A monitor has said a majority of the strikes were carried out by Russian jets. 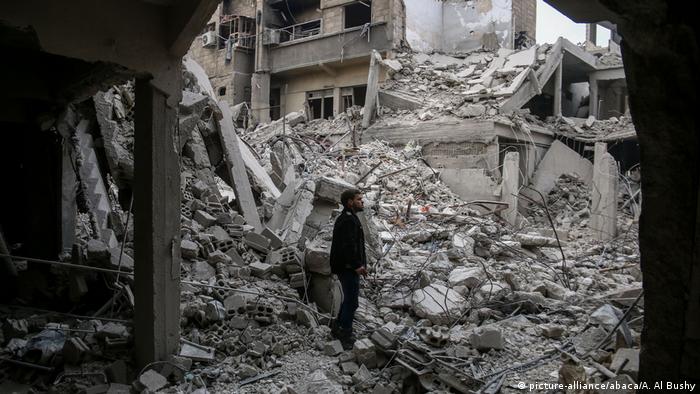 Syria's government and its Russian allies have upped their bombardment of residential areas in a besieged opposition enclave located outside the capital Damascus, the Syrian Observatory for Human Rights said on Thursday.

Within the last 24 hours, at least 30 civilians have been killed in airstrikes and shelling attacks in Eastern Ghouta, the head of the Britain-based monitor Rami Abdel Rahman said.

Two buildings were flattened by bombs in the Eastern Ghouta town of Misraba on Wednesday, killing 20 and wounding over 40 people, the Observatory and civil defense sources said.

The Observatory said Russian jets carried out the strikes in Misraba.

The Syrian state news agency SANA said that opposition shelling of Damascus, which is under government control, killed one person and wounded another 22 on Thursday.

The siege of Eastern Ghouta

Syrian government forces, backed by Russian air power, have intensified military operations in Eastern Ghouta in recent months in an attempt to expel opposition fighters there.

A total of 400,000 people in Eastern Ghouta have been largely cut off from humanitarian aid since 2013, which aid workers say is a deliberate use of starvation as a weapon of war.

The United Nations has said people in the area face a "complete catastrophe" due to blocked aid deliveries and that hundreds of people require medical evacuation.

The government of Syrian President Bashar al-Assad denies the charges.

Russia also rejects accusations that its jets have been involved in strikes that have killed civilians, saying that it only carries out attacks against hardline Islamists. Last month, Russian officials said they completed a partial troop withdrawal ordered by Russian President Vladimir Putin.