Medical evacuation comes too late for trapped Syrians | Middle East| News and analysis of events in the Arab world | DW | 27.12.2017

Aid groups are rushing to rescue Syrians in critical condition in Eastern Ghouta. But some have already died, while others fear reprisal from the regime if escorted to Damascus. Mat Nashed and Omar AlKhateeb report. 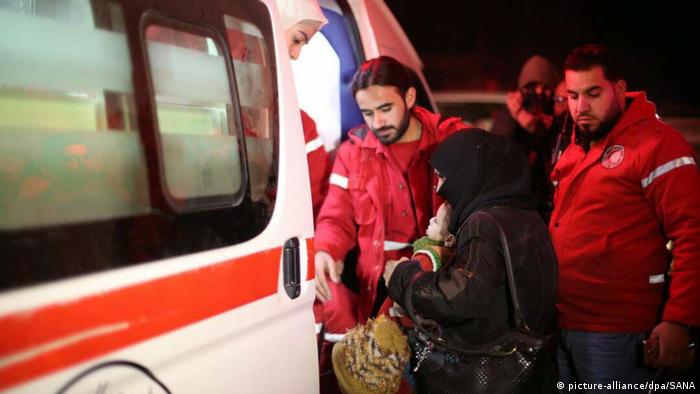 Hannan Al-Homsi used to scream throughout the night in pain, waking her son and granddaughter in Syria's besieged district Eastern Ghouta. Cut off from the world, she suffered from lung and kidney cancer, but was unable to access the treatment she had needed since 2013.

The agony stopped when she died in her son's arms on December 23. Hardly able to speak, she murmured her last words. It was the Shahada, one of the most important prayers in the Quran for professing one's faith in God.

"I feel very privileged that God let me be with my mother during her final breaths," said Al'aa Homsi, the 30-year-old son of Hannan. "She always clung to hope that she would leave [Eastern Ghouta]. She always told us that she was praying to God to be evacuated."

Homsi died at the age of 47. She was one of 500 people who the UN identified as needing immediate assistance in Damascus – just 15 kilometers (nine miles) away from Eastern Ghouta. But the real number of people who have asked to be evacuated is more than 640, according to the Syrian American Medical Society (SAMS), a non-profit monitoring the medical crisis across Syria.

That list is gradually shrinking as people die, yet some may have a reason to hope. On Wednesday morning, the Red Cross stated that the government permitted the evacuation of 29 critical cases that were considered most urgent by the end of October. But only four of those chosen have left Eastern Ghouta so far. 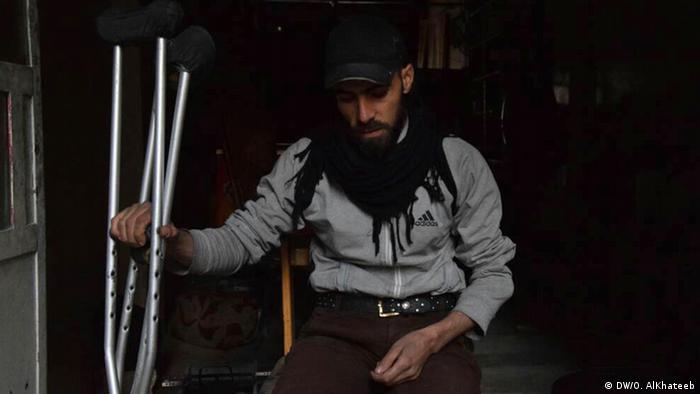 Riwan Al-Nasser was born weeks before the Syrian uprising with a myriad of medical conditions. She now suffers from cerebral palsy, kidney bleeding, neurological convulsions and liver diseases.

She's also malnourished, unable to consume food except through a tube. Riwan's father, Mohannad, says that his daughter used to be able to walk, but that the siege has paralyzed her. Since 2013, he has been unable to find a medical specialist to treat her in Eastern Ghouta, where only 107 qualified doctors remain to aid thousands of people. Neither can he obtain the lengthy list of medications that Riwan needs. For starters, she requires a special kind of milk. Feeding her a generic brand could worsen her condition, or kill her.

"We have to feed her something," Mohannad told DW.  "We have given her other kinds of milk, so she doesn't starve. But when she digests it, then it causes other problems for her stomach and liver." 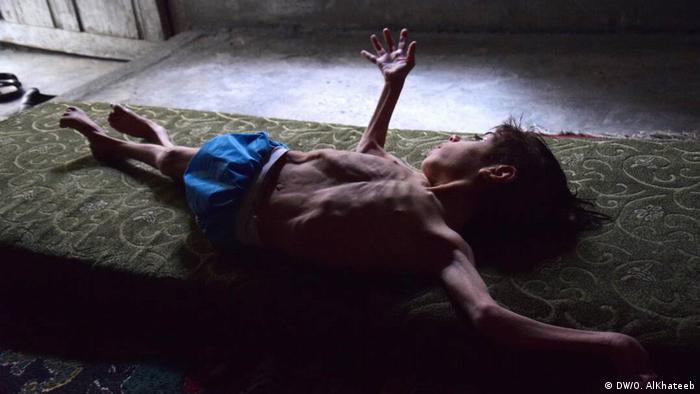 This past year the siege became more suffocating for Riwan. In April, government forces captured Barzeh and Qaboun – two areas in eastern Damascus – enabling them to seal underground tunnels that were used to smuggle weapons and basic items into Eastern Ghouta. The siege tightened in October after the government restricted access to al-Wafideen, the only commercial trade-crossing with Eastern Ghouta, causing the prices of goods to soar in the enclave.

The siege has made the milk that Riwan needs unaffordable even if her family could find it. By now, says Mohannad, it would cost 25,000 Syrian pounds ($50, €42) for a carton. But with four other mouths to feed, he struggles to muster enough bread for the family to eat each night.

Early Wednesday, Mohannad visited the Syrian Red Crescent, and was told that Riwan's name was not on the evacuation list. But even if she was, Mohannad said he would hesitate to escort her to Damascus, due to the fear that he could be arrested by the regime. In the case that she is allowed to leave Eastern Ghouta, he has requested to take her to Jordan, where he claims he has a sponsor to permit him entry into the country.

Several Syrian rebel groups have rejected Russian plans for a conference on Syria, accusing Moscow of war crimes. They also claimed Russia was trying to impose its conditions on the Syrian people. (26.12.2017)

Turkey could be another option. Three days ago, Turkish President Recep Tayyip Erdogan said that he was negotiating with Russia to fly civilians from Eastern Ghouta in for medical care.

Dr. Mohammad Katoub, the advocacy manager for SAMS, told DW that some people who registered their children's names for evacuation have changed their minds due to similar fears as Mohannad. Other parents, he stressed, have many sick children that they requested to be evacuated, but only one was chosen. These families are now forced to decide whether to stay together in besieged Ghouta or split apart.

While that may be so, Riwan's sicknesses requires treatment elsewhere, or else she will die. Other children on the evacuation list have already suffered the same fate. On Wednesday afternoon, a local medical team discovered that the six-month-old girl that they came to rescue had died weeks ago. Others will perish, warns Dr. Katoub, unless the siege is lifted, and evacuations are accelerated.

"Warehouses [in Eastern Ghouta] are running out of supplies," he stressed to DW. Doctors can't treat these people under siege. The scope of their medical services is shrinking by the day."