Aid groups have started medical evacuations of nearly 500 "critical cases" in a besieged rebel stronghold near Damascus. Aid workers have warned that the humanitarian situation there has again "reached a critical point." The International Committee of the Red Cross (ICRC) on Wednesday said aid workers had started to evacuate people suffering from severe medical conditions from the rebel stronghold of Eastern Ghouta, a suburb of the Syrian capital, Damascus.

"Tonight, the Syrian Red Crescent with the ICRC team started the evacuation of critical medical cases from Eastern Ghouta to Damascus," the relief group said in a tweet.

At least four people were evacuated on Wednesday, according to aid groups on the ground. The Syrian American Medical Society said the evacuations included "29 critical cases, approved for medical evacuation to Damascus."

According to the UN, nearly 500 people in the area need urgent access to health services. Although Eastern Ghouta is one of four "de-escalation" zones under an agreement between warring parties, the Syria government ramped up its bombardment of the suburb in November. 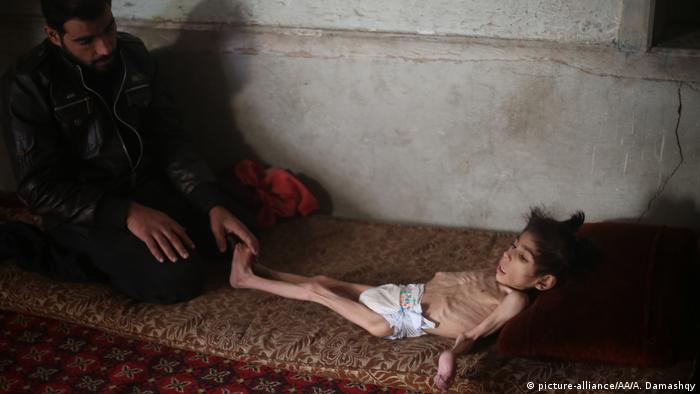 Dozens of children in Eastern Ghouta, including 8-year-old Syrian girl Ravan, are suffering from malnutrition and lack of health care

"The humanitarian situation in Eastern Ghouta has reached a critical point. As so often in Syria over the last six years, ordinary people are once again trapped in a situation where life slowly becomes impossible and where goods and aid are severely limited," said Mardini.

"The sick and injured must not be used as pawns in negotiations between the different parties involved in the fighting … No military or political gains could justify this amount of suffering, whether in Eastern Ghouta or elsewhere in Syria."

Considered one of the last rebel bastions in Syria, Eastern Ghouta has been under siege by government forces since 2013. The siege has caused severe shortages of food and medical supplies for its nearly 400,000 residents.

More than 300,000 people have been killed since 2011, when government forces launched a draconian crackdown on protesters calling for the release of political prisoners and for President Bashar al-Assad to step down.

The government brutality triggered an armed conflict that has transformed into a multi-front war, pulling in global powers, neighboring countries and non-state actors, including the US, Russia and Iran.

Despite several attempts to resolve the conflict through peaceful means, a political solution to the conflict remains elusive. The latest UN-brokered peace talks in Geneva have collapsed after government negotiators accused the opposition of undermining the country's political future.