Russian airstrikes have given cover to Syrian forces advancing into rebel-held territory in the south. In a confused situation, rebels seem ready to deal with Russian officials. 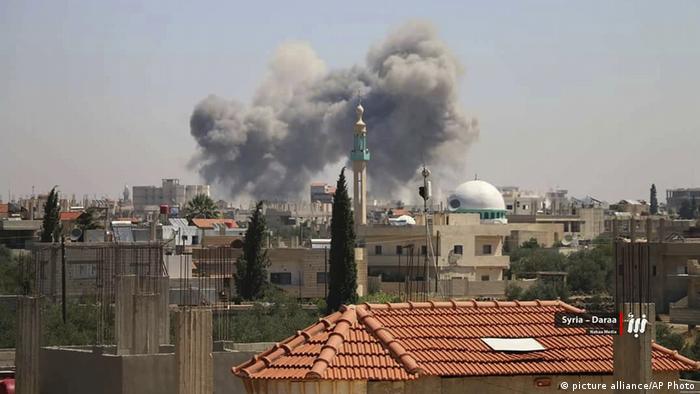 Russian airstrikes pounded towns in Syria's southwestern Deraa (Daraa) province overnight and into Saturday morning in the latest part of a monthlong offensive that has forced some 160,000 people to flee their homes, according to the UN.

Southwestern Syria is one of two remaining rebel strongholds, along with a region of the northwest, that Syrian President Bashar al-Assad has said he is determined to recapture.

Ibrahim Jabawi, spokesman for the rebels' joint operations room, said: "The committee held its first meeting with Russian officers who presented their demands."

Rami Abdel Rahman of the UK-based Syrian Observatory for Human Rights said: "At least eight towns in the northern and eastern Daraa countryside agreed to 'reconciliation' deals after talks in each town between Russian generals as well as local notables and remaining rebels."

Guterres reminded parties that the area was part of a de-escalation agreement agreed between Jordan, Russia and the United States.

The UN leader called on "all parties to respect their obligations under international humanitarian law and human rights law, protect civilians and facilitate safe, unimpeded and sustained humanitarian access."

Proximity to Israel: Fighting in the region risks a further escalation of the conflict due to its proximity to Israel, which said it would not allow Syrian ground forces, backed by Iran, in or near its occupied territory in the Golan Heights.

Russia's role: Since entering the war in 2015, Russia has been Syrian President Bashar al-Assad's most powerful backer, often targeting rebels across the country with scorched-earth bombing campaigns that have killed thousands of civilians and sparked international condemnation.

As the Russian bombardment in the southwest intensifies, the UN warned that 750,000 Syrian civilians are at risk.