Russia has carried out its first airstrikes in southwest Syria in support of an Assad regime offensive. The battlefield space is one of the most geopolitically complex and explosive in the seven-year war. 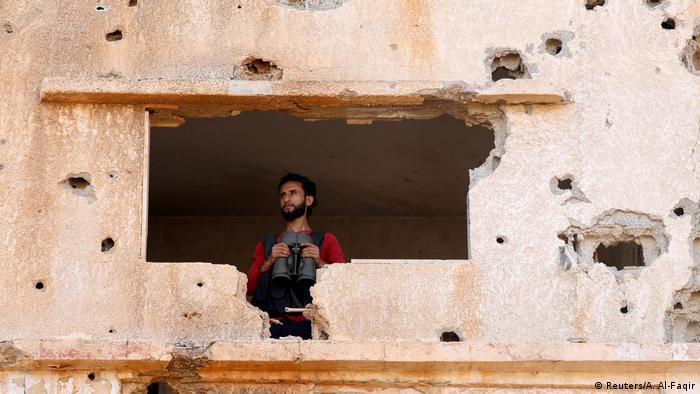 Russian warplanes pounded opposition areas in southwest Syria early Sunday, monitors said, providing air support for the first time to an offensive by President Bashar Assad's regime to retake one of the rebel's last strongholds in the south of Syria.

The Syrian Observatory for Human Rights said Russian warplanes carried out at least 25 sorties northeast of the city of Deraa.

Bordering on Jordan and the Israeli-controlled Golan Heights, the southwest Syria battlefront is one of the seven-year war's most complicated.

The Assad regime launched a ground and aerial offensive on opposition-held parts of Daraa, Quneitra and Sweida governorates earlier this week, endangering a one-year-old, tri-lateral "de-escalation" agreement guaranteed by Russia, the United States and Jordan.

An escalation of fighting in the southwest threatens to destabilize Jordan, displace tens of thousands of civilians and draw in regional and international powers, including raising the specter of a direct confrontation between Israel and Iran.

With rebel areas in Idlib and the northern Aleppo countryside under Turkish protection, and the United States backing Kurdish and Arab forces in the northeast against the "Islamic State," the Assad regime had been expected to launch an offensive in the southwest after retaking rebel strongholds around Damascus and western Syria in recent months.

Russian air power alongside Iranian ground forces and Iran-backed militia have been critical in helping Syrian forces retake territory from rebels and turn the tide of the war in favor of the regime.

Read more:  Iran's military power: What you need to know

The Syrian regime has used similar tactics against other rebel enclaves: relentless bombings and sieges followed by "reconciliation agreements" that see Damascus reassert control over territory and opposition forces submit or move to jihadi-dominated Idlib or Turkish-controlled areas.

Around 50 rebel groups under the banner of the Free Syrian Army-associated Southern Front had received support from the US, Jordan, the UK, the United Arab Emirates and Saudi Arabia from an operations center based in Amman.

This backing ended in early 2018 after the Trump administration last year announced it was pulling the plug on rebel groups seeking to oust Assad.

No help coming from the United States

The US administration has talked tough in recent weeks, warning the Assad regime and its allies that violations of the "de-escalation" agreement would have "serious repercussions" and trigger "firm and appropriate measures."

However, the United States has told southern rebel leaders that they should not expect military support, according to a message Washington sent to rebel factions on Sunday.

A message sent by Washington to the heads of the Free Syrian Army (FSA) groups said that "you should not base your decisions on the assumption or expectation of a military intervention by us."

"We in the United States government understand the difficult conditions you are facing and still advise the Russians and the Syrian regime not to undertake a military measure that violates the zone," the message also said.

As Washington sends mixed messages, the Syrian regime offensive risks an intervention from US ally Israel.

Israel has repeatedly carried out attacks on Iranian forces, Iran-backed militia and the regime forces as it seeks to enforce red lines to keep Iran's Islamic Revolutionary Guard Corps and Iran-backed forces from encroaching on its territory.

According to a report by the International Crisis Group this week, "the risk of Israeli intervention and a broader escalation between Iran and Israel stands out as the most consequential uncertainty inherent in a south-west offensive, whose destructive potential may give Damascus and its allies pause."

Russia's military involvement in the southwest provides a cover for advancing Syrian forces, as the best deterrence against Israel is the risk that they hit Russian military assets.

At the same time, Russia's policy involves complex diplomatic maneuvering, with Moscow playing a key role in trying to reduce the threat of escalation that could endanger its Syrian ally or risk conflict between Israel and Iran.

Russia has reportedly been in diplomatic talks with Israel, whereby Moscow would ensure Iran and Iran-backed forces stay out of a regime offensive in the southwest in exchange for Israel greenlighting the Assad regime's  reassertion of authority in the southwest.

"Damascus, Moscow and Tehran all appear to understand Israel's red lines, even if their willingness to respect them remains uncertain," the International Crisis Group said. "Nonetheless, they seem to have taken steps to address some Israeli concerns and thus smooth the Syrian regime's return to the southwest."

A regime offensive in southern Syria has threatened to displace thousands near the Jordanian border. The US has warned Damascus of upending a ceasefire in the area, saying it will take "firm and appropriate measures." (21.06.2018)

What foreign powers want from the Syrian war

The Syrian opposition and forces loyal to President Bashar Assad are not the only groups fighting in the conflict. Other countries have also intervened to pursue their own interests. (12.04.2018)

The German chancellor has offered aid to Lebanon as it struggles to cope with nearly 1 million Syrian refugees. She is hoping to reduce migrant arrivals to Europe by supporting countries near Syria. (22.06.2018)