Jordan launches aid drive for Syrian refugees trapped at its border | Middle East | News and analysis of events in the Arab world | DW | 03.07.2018

Jordan's government has closed its border to refugees fleeing the war in southern Syria, instead launching a national aid drive to help those trapped. The policy has drawn harsh criticism on social media. 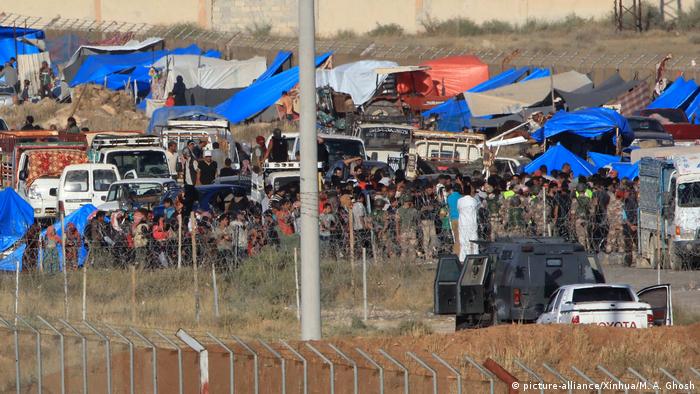 The United Nations on Tuesday urged Jordan to open its borders to Syrians fleeing Daraa, where President Bashar Assad's government  is currently in a fight against rebels to take back the city.
"We call on the Jordanian government to keep its border open and for other countries in the region to step up and receive the fleeing civilians," UN human rights spokesperson Liz Throssel said.

The Jordanian government at present has closed its border to Syria, leaving civilians attempting to escape the violence in Daraa stranded.  The latest UN figures indicate that over 270,000 refugees have fled the battle there.

Government officials in Jordan, however, argue that the country is already at full capacity. "We have received enough Syrian refugees; we already have a large number and we simply cannot receive more," Minister of State for Media Affairs Jumana Ghunaimat told The Jordan Times over the weekend.

According to the UN refugee agency, UNHCR, there are currently 666,596 Syrian refugees in Jordan as of June 2018.  The Jordanian government has now opted to provide more humanitarian support to refugees at its border instead of taking them in. On Sunday, Jordanian Prime Minister Omar Razzaz launched a nationwide effort to collect donations including food, water and medical supplies for Syrian refugees fleeing Daraa.

Dr. Tina Zintl, a senior researcher at the German Development Institute, believes the Jordanian government's stance makes sense given the current internal situation there. "Jordan could make the extra effort and take in more people," she told DW. "But in terms of domestic politics it is quite a hard game so I completely understand why the Jordanian side has decided to not take in more refugees but instead provide humanitarian aid."

Many Syrian refugees are clustered in the north of the country, Zintl said. In cities located near the Syrian border, such as Mafraq and Irbid, local residents argue taking in more refugees would put a strain on their resources and burden the economy.

On social media, many Jordanians have expressed their willingness to help the Daraa refugees, as well as their views on how their government and other governments in the region are handling the humanitarian crisis. Many people are urging authorities to let the Syrians in, using the trending Arabic Twitter hashtag "Open the borders." Another hashtag, "We will share bread with them," was also popular among Jordanians.

"I'm contributing by hosting a family of five refugees from Daraa," Jordanian lawyer and human rights activist Tareq al-Tarawaneh wrote. In addition to the "Open the borders" hashtag, he included another that read: "They are our guests and not refugees."

Jordan closed its southern border to Syria in 2016, with the government citing fears that the war could spill over into its territory.

Asma Jahamah, a PhD candidate in Postcolonial Literature at Essex University and a Jordanian citizen, deplored her government for not taking in the Syrians trapped at the border. She disputes the notion that Syrian refugees are a burden for Jordan's economy and argues corruption is the main factor behind the country's current economic woes.

In February, Transparency International ranked Jordan 59 out of 180 on its list of most corrupt countries. The organization urged the government in Amman to work on "strengthening anti-money laundering legislation" and protecting whistleblowers.

Gulf states have 'responsibility' to do more

"Those fleeing the hell of the war in Syria are victims," Tayseer al-Samadi, a former member of the Jordanian Senate wrote on Twitter. "There is no doubt that the responsibility for these refugees is both an international and regional one. It is necessary that the Gulf States and the international community carries the moral and humanitarian responsibility to help." He then included an Arabic hashtag "No to opening the borders." Al-Samadi argued that the Jordanian government was not doing enough to host Syrians fleeing the war and that countries like Saudi Arabia and Qatar, which have taken in very few refugees, should do more.

Zintl also believes that Gulf States have not done enough, saying they have a responsibility to help. "Since the start of the Syrian crisis the Gulf countries have only really been active diplomatically," she said. "They haven't really taken in any refugees and have not taken part in any resettlement programs."

After a US-Russia deadlock, the UN Security Council has agreed to extend a cross-border transfer of aid from Turkey to rebel-held areas of Syria — but only for six months, as demanded by Moscow.

Blast at Kabul educational institute kills over a dozen

Brazil election: Bolsonaro, da Silva jab at each other in presidential debate