In an exclusive interview with DW, the socialist Left Party's lead candidate Janine Wissler sharply criticized the German government's response in Afghanistan. They "have endangered human lives," she said.

Janine Wissler, the lead candidate for the socialist Left Party (Die Linke), told DW that the German government was wrong to have completely halted development aid to Afghanistan after the Taliban took over.

Wissler, the 39-year-old co-chair of the party, said Chancellor Angela Merkel's coalition government ignored early warning signs in Afghanistan in order to avoid a debate over migrant and refugee arrivals in Germany — with just weeks to go until the September 26 polls.

Against cutting off funds for Afghanistan

Wissler said that despite the Taliban takeover, now is not the time for Germany to be pulling development aid to Afghanistan.

"I am against completely cutting off the funds for development cooperation. This is about the people, who are now suffering both at the hands of the Taliban, and from the terrible humanitarian situation on the ground. Of course, we need to keep an eye on what happens next," she told DW.

Afghanistan was slated to be one of the main recipients of German development aid for this year — at some €250 million (nearly $300 million) — but none of that money has been paid out.

The total amount of development and humanitarian aid Germany budgeted for Afghanistan this year would have amounted to around €430 million.

Should Germany continue to send aid to Taliban-controlled Afghanistan?

The Left Party co-chair reserved particularly harsh criticism for German Chancellor Angela Merkel's government for not getting at-risk staff out of the country sooner.

"That's a shabby way to treat the local staff. They're flying 65,000 liters of beer out of there, but when it comes to the people that were working for the Bundeswehr and for other German institutions — the human rights activists, women's rights activists — they're being left to fend for themselves," Wissler said.

Ahead of Germany's troop pullout at the end of June, the military implemented an alcohol ban for its troops and flew its stock of beer, wine and other spirits out of Afghanistan. Reports at the time said the military was concerned about potential attacks and didn't want German soldiers drinking.

Wissler also sharply criticized the finger-pointing within the German government over which ministry or agency is to blame for the lack of evacuation plan for staff on the ground in Afghanistan.

"What the German government is doing now is disgraceful. It's clear the entire government shares responsibility, and by that, I also mean the chancellor and the vice-chancellor."

She accused Merkel's government of ignoring warning signs of the Taliban takeover for their own political benefit ahead of the general election.

"The government have endangered human lives with their actions. I worry that they were just looking to hold out until after the election," Wissler said.

"They were trying to avoid a debate on migration in Germany before the election, and in doing so, they put peoples' lives at risk."

Navalny 'not the political alternative' to Putin

The Left Party is frequently criticized for its stance towards Russia, calling for friendlier ties with Moscow.

When asked whether she would prefer to have jailed Kremlin critic Alexei Navalny as president rather than Vladimir Putin, Wissler said neither were ideal.

"There are also much more progressive forces in Russia than those two," she said.

"Navalny has my solidarity" because he's been imprisoned by the Russian government, "but despite that, Navalny is not someone with whom I have political sympathies, who would be politically close with me or my party," she said. 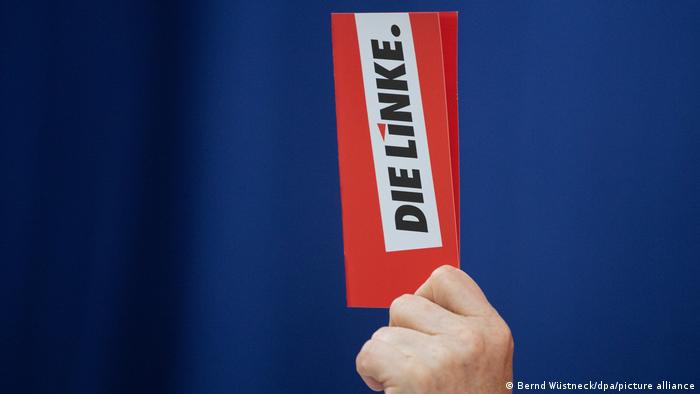 Although well established in federal and state politics, the Left Party is treated as a pariah by other German parties — largely due to its foreign policy positions

Wissler specifically criticized comments Navalny made back in 2007 where he made disparaging remarks about Muslims and other more right-wing views. In February, rights group Amnesty International removed Navalny from their "prisoner of conscience" list, saying Navalny had not publicly denounced certain comments he's made in the past.

"I have no sympathies with Putin, but for me, Navalny is simply not the political alternative to him," Wissler added.

While the Left Party is unlikely to lead a government, recent opinion polls suggest they could be a player in coalition talks — potentially with the center-left Social Democrats (SPD) and the environmentalist Greens.

The party's foreign policy positions, including disbanding NATO and pulling German troops out of missions abroad, will be major hurdles for other parties in possible coalition talks.

In their election platform, the Left Party calls for NATO to be scrapped and replaced with a security system involving Russia. They also want to end all foreign deployments of German troops and staunchly advocate for Germany to halt all arms exports.

In an interview with DW last week, Olaf Scholz, Germany's vice-chancellor and the SPD's chancellor candidate said that remaining a member of NATO was crucial to government talks.

But those are positions that the Left Party isn't interested in giving up, Wissler said.

"After the disaster that we're currently seeing in Afghanistan, I think that there is one party that has relatively few reasons to re-think their foreign policy positions — and that is the Left Party," she said.

The interview was conducted by DW's head of Current Politics, Rosalia Romaniec, and DW reporter and editor Chiponda Chimbelu.