After Afghanistan: Germany rethinks its military missions | Germany | News and in-depth reporting from Berlin and beyond | DW | 19.08.2021

Afghanistan was Germany's longest and largest military engagement in modern history, but not its only one. The debacle there has prompted a new debate over the country's troop deployments elsewhere. 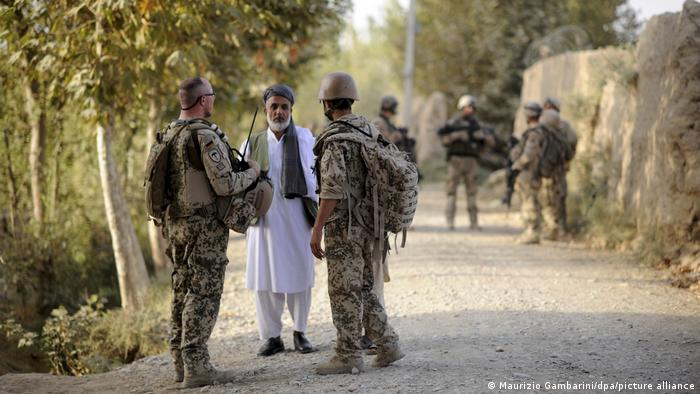 The Germany the world knows today does not like talking about military force — much less using it. For decades, its armed forces, the Bundeswehr, stayed close to home or played small, non-combat roles in international operations. Anything more was met with constitutional challenges or political backlash, as the government experienced in 1999 when it agreed to its first-ever combat role, joining NATO allies in Kosovo.

When Germany sends its soldiers somewhere to shoot and be shot at, it's a big deal. That was nowhere more evident than Afghanistan. The 9/11 attacks in 2001 prompted the US to invoke NATO's Article 5 — the alliance's common defense clause — for the first time, and Germany met its treaty obligations.

Thousands of German soldiers served in the mission  — 150,000 in all, according to the German Defense Ministry. It cost the country 59 lives and at least €12.5 billion ($14.6 billion) in combat and training operations. Germany was one of the alliance's biggest contributors of troops.

Twenty years later, there is almost nothing to show for the country's longest, largest and most dangerous foreign military deployment.

From the Hindu Kush to the Sahara Desert

The Bundeswehr is involved in 11 missions abroad, according to the Defense Ministry, involving 2,500 soldiers on three continents. That includes a presence in Iraq, Lebanon, the Baltics, on the Mediterranean and off the coast of Somalia. Though each carries risks, few of them involve combat, and most fall under a multinational or United Nations umbrella.

For that reason, there is little reason to think that the experience in Afghanistan will have any significant impact on them, said Sebastian Schulte, the editor-in-chief for Griephan, a security publication.

"Every operation that the Bundeswehr is part of is its own operation, with its own goals," he said. "No other operation it's currently undertaking is anything what Afghanistan was."

A maritime mission to stop pirates, for example, is "not comparable" to providing security in Mazar-e-sharif, in northern Afghanistan, or nation-building tasks, he said.

"I would be very surprised if the German government threw the baby out with the bathwater," Schulte added.

The next closest engagement to Afghanistan for Germany is in Mali, in western Africa. More than half of Germany's total deployed forces are there as part of peacekeeping and training missions with the UN and European Union, respectively. Though several thousand French soldiers are responsible for combat operations, German troops have been wounded in attacks.

Mali has been the scene of political instability and insurgent violence for years. Germany's parliament, the Bundestag, first approved sending 150 troops to join the UN peacekeeping mission in 2013. It has been extended multiple times, most recently in May, with the troop cap now at 1,100. Another extension will be up for debate next year.

"It's in our own interests that Mali is further stabilized and developed, but not just militarily," Klaus Wittmann, a retired general, told DW. "But there is need for clearer goals and criteria for 'success' and 'progress,' as well as ongoing, objective evaluation."

Even before the Afghan rout, the Mali deployment was ruffling feathers in Germany due to a lack of political progress and a worsening security situation there. At least two coups have taken place in the last few years.

Now Germany's involvement will fall under a broader defense review.

"We have lessons to learn from [Afghanistan]," Defense Minister Annegret Kramp-Karrenbauer told the Rheinische Post newspaper on Wednesday. "That's why we are going to check the armed forces' other foreign missions, whether we're well situated and what we perhaps have to do better."

The keyword for both government and opposition officials alike seems to be "objectives." At a Monday news conference, Chancellor Angela Merkel spoke of the need for "smaller objectives." Armin Laschet, who is running to replace her in next month's general elections, said on Tuesday that objectives need to be "clearer."

Germany's socialist Left is the only party to categorically oppose military missions, as well as weapons exports and the NATO alliance. If they had their way, Germany would be out of Mali, too.

Merkel and others have acknowledged that Mali shares some aspects with Afghanistan: an expanding mission to prop up an unstable political situation threatened by militants.

Doing away with military engagement altogether is the wrong lesson, Cem Özdemir, a Greens lawmaker, told public broadcaster DLF on Wednesday. Armed intervention could be necessary in cases of crimes against humanity, he said. Western powers in the 1990s were slow to act against ethnic cleansing in the Balkans and genocide in Rwanda, for example, despite their stated commitments to defend human rights.

"Yes to critical review, but a complete rejection of foreign missions is not the right lesson," Özdemir said.

Defense and foreign policy do not usually play a large role in German elections. That may change this year, as the Bundeswehr struggles to get people out of Afghanistan just weeks before German voters go to the polls.

"The timing with the campaign and the election is, cynically speaking, a good thing," Griephan editor Schulte said. "This forces the chancellor candidates to seriously discuss Germany's military capabilities."

The US withdrawal and rapid deterioration of the security situation in Afghanistan has prompted criticism among some NATO alliance members.

NATO's unconditional withdrawal from Afghanistan has emboldened the Taliban and reignited the civil war. Germany now has the moral duty to help its local forces without too much red tape, says Sandra Petersmann.

Germany's Left is campaigning on a platform with a focus on social care. But it is also calling for an end to all Bundeswehr missions abroad, to stop all weapons exports and for the NATO alliance to be scrapped.