Ten Years On, Germany Looks Back at Return to War in Kosovo | Germany | News and in-depth reporting from Berlin and beyond | DW | 24.03.2009

Ten Years On, Germany Looks Back at Return to War in Kosovo 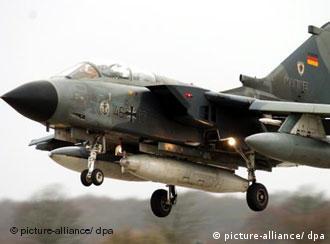 Then-Chancellor Gerhard Schroeder had only been in office for a few months when he was called to explain Germany's participation in a NATO bombing operation.

"Overnight on Thursday, NATO launched air strikes against military targets in Yugoslavia. The alliance was compelled to take this step in order to prevent further heavy and systematic infringement of human rights in Kosovo," Schroeder told the parliament.

It was the first time since World War II that German soldiers had taken part in a combat mission. For Germany, the timing was complicated. Schroeder's Social Democrats had just won a parliamentary majority together with the Green party, forming a so-called Red-Green Coalition.

One of their first decisions was whether to have the Bundeswehr, which is what Germany's federal armed forces are called, participate in NATO fighting. From the beginning, Schroeder was confident that he had political and public support for the mission. 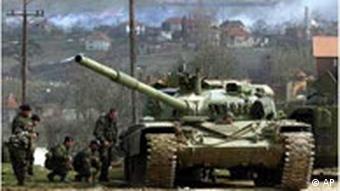 The weeks leading up to Schroeder's speech before parliament was had been turbulent ones. The Kosovo crisis was intensifying at the same time that the 16-year tenure of Chancellor Helmut Kohl was coming to an end. Schroeder's new coalition had not even had a chance to settle in before being hit with a series of major foreign policy decisions.

NATO was turning up the heat on Yugoslavian President Slobodan Milosevic, warning that it would launch air strikes if the expulsions and killings in Kosovo continued. NATO General Secretary Javier Solana issued a warning in the fall of 2008: "Just a few moments ago, the North Atlantic Council decided to issue activation orders - ACTORDs - for both a phased air campaign in Yugoslavia and limited air operations."

NATO expected Germany to make a contribution to the fighting. The newly-elected parliament held a special meeting in October 1998 in Bonn, Germany. A large majority of the delegates decided to allow Bundeswehr troops to take part in NATO air strikes, even without a United Nations mandate.

Deployment without a UN mandate

Negotiations continued. Yugoslavian representatives meet with Kosovo-Albanians and NATO in search of a solution. Germany's new government, inexperienced in foreign policy, took a low-key approach, yet threw its support behind NATO.

Rudolf Scharping, the Secretary of Defense for the Social Democrats, said at the time: "We want to do everything in our power to keep corpses from piling up in the Balkans and to ensure that there isn't a new stream of refugees into Europe."

After Yugoslavia refused to accept the Rambouillet Agreement, NATO began bombing targets in Belgrade and other Serbian cities. Fourteen German Tornado fighter planes were used for air reconnaissance and to attack Serbian air defense positions. This meant not only that German soldiers took an active role in fighting for the first time since the end of World War II, but that they did so without a UN mandate. The German government justified its participation by saying it could not close its eyes to the suffering of the civilian population in Kosovo. 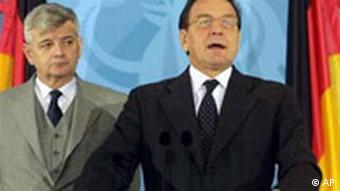 Schroeder, right, and Fischer, left, both supported the Kosovo war

This policy change was particularly difficult for the Green party, which historically has had close links to the peace movement. Angry demonstrators called top Green politicians "murderers" as they arrived with police escorts for a party meeting in May of 1999.

Many long-time Green supporters vehemently reject the use of military force, yet Parliamentarian Angelika Beer defended party leaders from criticisms and insults being hurled at them. The critics were cowardly, she said, and had no good alternatives to offer.

Joschka Fisher, the Green's Foreign Minister, found himself at the center of the criticism for his support of the war. At one point a paint bomb was lobbed at his head, injuring him slightly.

"At this moment in time, I regard a one-sided, unlimited cessation of the bomb attacks as a wrong signal," Fischer said at one point. 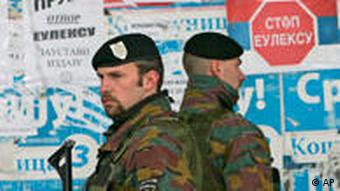 KFOR still has soldiers in Kosovo

June of 1999, Milosevic withdrew his troops, allowing NATO peacekeeping troops KFOR to move in. Bundeswehr General Klaus Reinhardt was the commander of KFOR for several years. The deployment was important, Reinhardt said.

"In Kosovo, external stability was important because Milosevic had said each day: ‘I will take my country back by force,'" Reinhardt said.

Only when the situation is stable can political and economic conditions improve, the general said. However, bringing stability to Kosovo has taken much longer than anyone expected at the time. The Red-Green coalition has been out of office for nearly four years, but there are still more than 2,500 German soldiers stationed in Kosovo.

NATO Strikes Over Kosovo Continue to Divide, 10 Years On

Instability and discontent remain in Kosovo a decade after NATO air strikes against Yugoslavia ended a war between Serb forces and ethnic Albanian guerrillas, and one year after Pristina declared independence. (24.03.2009)