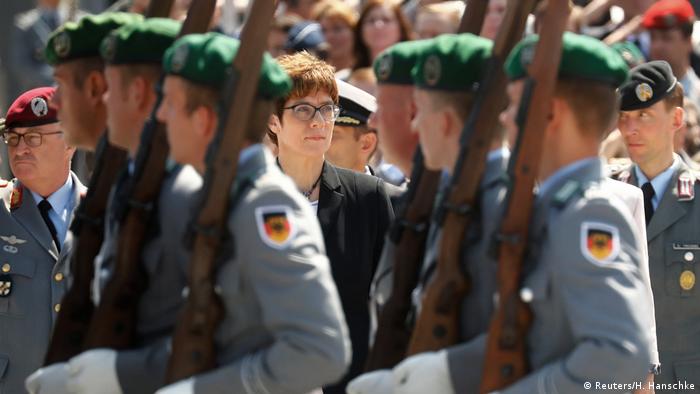 Of all Germany's ministerial posts, that of the defense minister is widely seen as a poisoned chalice. But for Annegret Kramp-Karrenbauer, also known by her initials AKK, it could be the deciding move on her way to the top as chancellor as she sets her sights on the 2021 elections.

Chancellor Angela Merkel's surprise decision on Tuesday to hand AKK the Defense Ministry immediately came under fire from the opposition, largely due to the nominee's lack of experience in the field. AKK, the leader of Germany's conservative Christian Democrats (CDU), joins the Defense Ministry in the middle of extensive reforms and on the tail-end of countless scandals left behind by her predecessor, Ursula von der Leyen.

On the international stage, how AKK addresses the German defense budget will be of huge interest to Germany's fellow NATO allies — not least of all the Trump administration. US President Donald Trump has been particularly vocal in his criticism of Berlin for failing to spend 2% of its GDP on defense — a target which NATO adopted at its 2014 Wales Summit in response to the Ukraine crisis.

Germany's current coalition government has vowed to increase its defense spending to 1.5% of GDP by 2025, but a recent assessment by the German defense industry slated spending to actually drop to 1.25% by 2023.

AKK, too, has previously advocated the 2% target. But advocate as she might, reaching such a target in the current legislative period seems impossible. Merkel's junior coalition partner, the Social Democrats (SPD), staunchly positioned themselves against the 2% goal in Germany's 2017 federal elections and have remained resolute.

Conservative MP and former general staff officer in the Bundeswehr, Roderich Kiesewetter, told DW that in appointing AKK as defense minister, Merkel's governing conservatives show that they're committed to Germany's military and want to send a "strong signal to allies in NATO and the EU."

After throwing her support behind a joint aircraft carrier with neighboring France earlier this year, the incoming defense minister has already earmarked new transnational ventures. Efforts to continue building trust with eastern EU member states will also be imperative to strengthening Europe as a whole.

Read more: US calls for German ground troops in Syria

Closer to home, AKK is about to walk into the aftermath of a host of scandals left behind by von der Leyen. An investigation by a commission of MPs into a spending scandal involving the Defense Ministry's allocation of lucrative contracts worth hundreds of millions of euros is already underway. Questions also remain over whether the Gorch Fock sailing ship — used by the Bundeswehr for training exercises — still has a future, despite skyrocketing costs in restoration work of up to €135 million ($150 million). And on top of all this, AKK must win over the trust and support of the military. 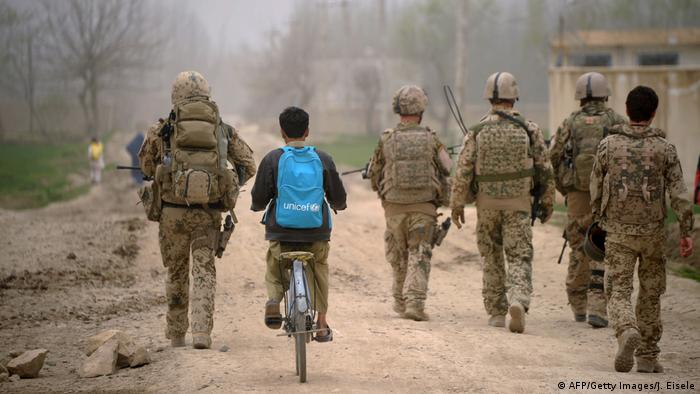 Bundeswehr troops in Afghanistan have often been left with inadequate equipment

"The first thing that Kramp-Karrenbauer needs to do is connect with the troops," Jana Puglierin from the German Council on Foreign Relations told DW. "This is something which her predecessor failed to do."

Remarks made by von der Leyen two years ago, following the case of right-wing extremist army officer Franco A., alienated many troops. The scandal was proof that the Bundeswehr has an "attitude problem," von der Leyen said in 2017.

If AKK does indeed pursue her plans to run for chancellor in the 2021 elections, that leaves her only two years to prove that her appointment has the interests of troops and the military in mind, and isn't just a "parking position" to build her own profile on the international stage, Puglierin said.

In contrast to von der Leyen, however, AKK has already reached out to troops on accepting her new post. "The soldiers and other employees of the German Armed Forces are under particular pressure. And that is why they deserve the highest priority," AKK said on Wednesday, adding that her thoughts went out to troops currently on foreign missions. 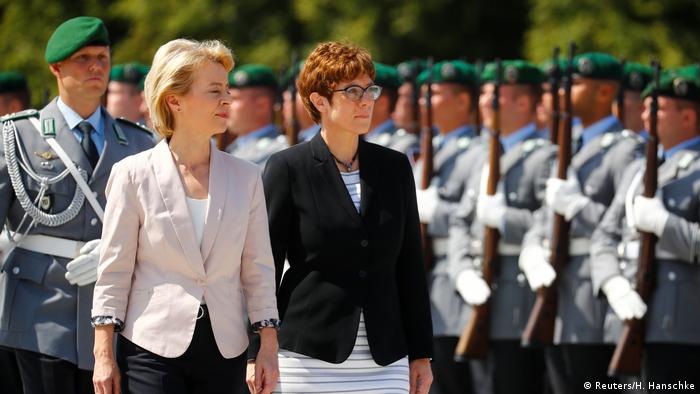 Out with the old, in with the new: Ursula von der Leyen (left) and Annegret Kramp-Karrenbauer at Wednesday's welcoming ceremony

On the ground, AKK is also faced with the task of pushing through reforms to modernize and maintain Bundeswehr equipment and weapon systems. A parliamentary report earlier this year found that less than 50% of the Bundeswehr's tanks, ships and aircraft were often available at any one time, either for training or operational purposes.

In some instances, German soldiers in Afghanistan have had to rely on civilian helicopters to transport them around the country, while vital equipment such as body armor has to be borrowed.

Another worry for the Defense Ministry is the stagnation of its post-conscription recruitment drive, which began after Germany scrapped national service in 2011.

In addition to maintaining and improving the old, AKK must also see in the new, with demands to digitize the military high up on the agenda. But creating a cyber military will be yet another question of cash flow for the ministry.

Underfunded and overflowing with scandals, the German Defense Ministry can quickly become a political minefield and is prone to making headlines with ongoing scandals. AKK will be hoping that she won't be part of the next one.