Germany 'hypocritical' on NATO: US envoy to Germany Richard Grenell

US President Donald Trump's top diplomat in Berlin said German politicians were not committed enough to NATO's defense spending target. He also said the country should have learned a better lesson from WWII. 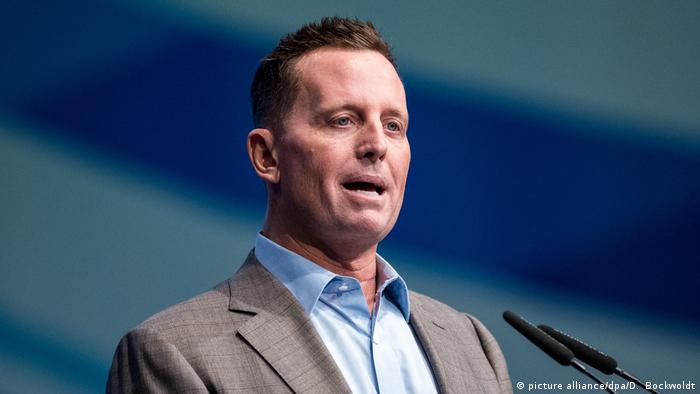 The United States ambassador to Germany on Thursday accused the German government of pursuing a hypocritical policy toward the NATO military alliance.

"It seems hypocritical to say that we should reform NATO while not aiming for the 2%," Richard Grenell told Bild newspaper, referring to an alliance goal of spending at least 2% of gross domestic product (GDP) on defense.

He said he also found it surprising "how many German politicians try to talk about the 2% as a mere aim, but not a true commitment."

NATO members agreed at a summit in 2014 to meet the 2% target by 2024. But German Finance Minister Olaf Scholz said earlier this year that spending would equal 1.25% of GDP by then.

"You can do business in Iran all you want, but we get to have a policy," he said. "If you do this, we're not comfortable having you come into our country."

Asked about what surprised him the most about Germany during his first year as ambassador, Grenell said: "I've been surprised at how reluctant the Germans are to flex their muscles in Brussels and on the world stage."

The ambassador also said Germany had learned the wrong lesson of "we don't like war, we'll stay out" from its experience in World War II.

"That saddens me, because I think that the lessons of World War II should be that the Germans are the first to recognize a madman gassing children in Syria," he said, referring to Germany's reluctance to take military action against President Bashar Assad in 2018.

Grenell has repeatedly been criticized by German lawmakers and commentators for his confrontational style and vocal support for Trump's "America First" foreign policy.

US Ambassador Richard Grenell is acting like "a high commissioner of an occupying power," the deputy leader of the Free Democrats (FDP) has said. Grenell has also drawn rebuffs from Germany's two governing parties. (19.03.2019)

The US said it would impose "unprecedented financial pressure on Iran." The refusal to grant EU businesses an exemption for Iran sanctions pushes Europe and the US further down a collision course over ties to Tehran. (16.07.2018)