The US ambassador to Berlin, Richard Grenell, has sent threatening letters to German companies working on the Nord Stream 2 pipeline, according to a German newspaper. Grenell reportedly warns of possible sanctions. 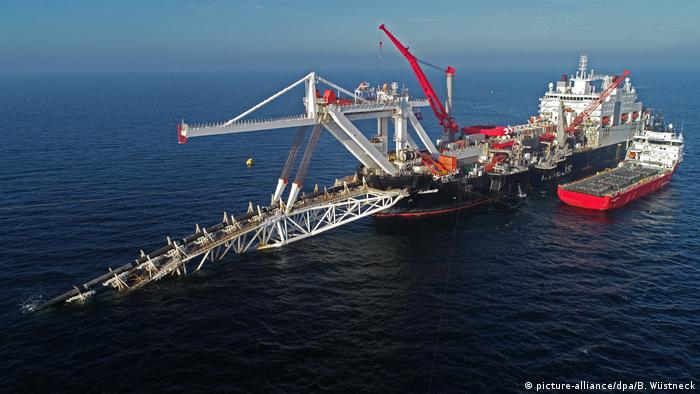 German companies building the Nord Stream 2 pipeline between Germany and Russia received letters from US Ambassador Richard Grenell warning them of "a significant risk of sanctions" if they did not pull out of the project, Germany's mass-circulation Bild am Sonntag has reported.

The large pipeline is set to deliver gas from northwestern Russia to northern Germany under the Baltic Sea and effectively double the amount of gas Germany imports from the country.

The US opposes the project over fears that the gas link would tighten Russia's control of Europe's energy supply and diminish the importance of gas transit countries such as Ukraine. US companies are also keen to sell gas obtained by fracking to many European countries.

In the letter cited by Bild am Sonntag, Grenell wrote that the pipeline would make Europe dependent on Moscow and increase the threat of Russian interventions.

"We emphasize that companies involved in Russian energy exports are taking part in something that could prompt a significant risk of sanctions," the ambassador wrote.

The paper also quoted a Grenell spokesman who said that the letter should not be seen as a threat, but as a "clear message of US policy."

Read more: Nord Stream 2 gas pipeline - What is the controversy about?

In November, the US ambassador to the EU had warned that US President Donald Trump has "many, many other tools" to "curb and stop the project" if Berlin stayed adamant.

"We have not deployed the full set of tools yet that could significantly undermine if not outright stop the project," Ambassador Gordon Sondland said, according to the Reuters news agency.

However, Grenell's latest move remains highly unusual and is likely to prompt fresh tensions between Washington and Berlin.

Grenell managed to prompt irritation in Berlin on the day of he took office in May 2018 by tweeting that "German companies doing business in Iran should wind down operations immediately."

Less than a month later, Grenell told the far-right Breitbart news website that he saw his tasks as one of "empowering" Europe's right-wing governments and budding leaders. He also said that NATO members should back US interventions abroad.

"The US should no longer come to accept any excuses for not taking part in military intervention," he said.

Last month, Grenell accused Germany's Spiegel magazine of having an anti-American bias and demanded an investigation into stories written by its disgraced reporter, Claas Relotius.